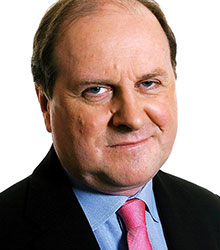 James Naughtie is one of the country's best-known broadcasters and until stepping down in December 2015, had been a presenter of the BBC’s Today programme since February 1994. His career in political journalism has taken him across the world - in Europe, the Middle East, China (including Tibet), Australia and, maybe most notably, to the United States.

Since joining the BBC in 1988, James has worked on every presidential election and his store of American political trivia is the stuff of office legend. That American interest was the subject of his second book on the Blair era, “The Accidental American” (2004) about Tony Blair's relationship with George W Bush. He had previously published “The Rivals” in 2001: the book that first revealed the stormy nature of the relationship between Blair and Gordon Brown.

James Naughtie was educated at Aberdeen University and at Syracuse University, New York. His career as a journalist began at The Aberdeen Press & Journal in 1975. In 1977 he moved to The Scotsman in London and joined its Westminster staff in 1978 and subsequently became the paper's Chief Political Correspondent. In 1981 he worked on the national staff of The Washington Post as the Laurence Sterne Fellow. James joined The Guardian in 1984, becoming its Chief Political Correspondent in 1985.

Throughout June, July and August 2012, and in early September 2012, James Naughtie presented "The New Elizabethans" on Radio Four, a programme about notable people under the reign of Queen Elizabeth II. This programme was put on to honour the Diamond Jubilee of Queen Elizabeth II. It has dealt with various famous names, including Richard Doll, Philip Larkin, Elizabeth David, Margot Fonteyn, Peter Hall, Cicely Saunders, John Lennon and Paul McCartney and Tim Berners-Lee. The final week of the programme dealt with Tony Blair, Frederick Goodwin, Rupert Murdoch, Simon Cowell and finished with Queen Elizabeth the Second.

He has a distinctive Scottish accent which has been named as the "best voice to wake up to" in a comparative survey. James was voted Sony Radio Awards Radio Personality of the Year in 1991 and Voice of the Listener and Viewer Award in 2001. He is a member of the Marshall Aid Commemoration Commission and a United Kingdom advisory board member for the British-American Project, which exists to promote the British-American relationship. James was installed as chancellor of the University of Stirling in 2008.

Aside from journalism and politics, James' special interest is music. His 60-part series, The Making of Music (2007) for Radio 4 was voted radio programme of the year by The Voice of the Listener and Viewer. His book of the same name explains his passion of music. For some years James presented a Radio 3 programme on opera and has presented many concerts for BBC radio and television. He has chaired Radio 4's monthly Bookclub since it started in 1997.

James Naughtie created exactly the relaxed tone that we hoped to achieve, coupled with wonderful inside knowledge.

How to book James Naughtie for your event