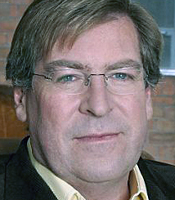 Edward Stourton is one of Radio 4's leading presenters of news and documentaries, including The World at One, The World this Weekend, Sunday and Analysisa and is a regular contributor to the Today programme, where for ten years he was one of the main presenters.

Edward has written and presented several high-profile current affairs programmes and documentaries for radio and television. He also writes for national newspapers and magazines. As well as contributing to Any Questions and the Heaven and Earth Show for the BBC, he is host of the foreign affairs programme Correspondent, which was nominated for an Emmy and won an Amnesty award.

His own Radio 4 phone-in programme, Call Ed Stourton, won the Sony Award for Best Radio News and Current Affairs Programme in 1997. Other work for Radio 4 includes the series The Violence Files, Asia Gold, Global Shakeout and the lecture series Iconoclasts in association with the RSA. Asia Gold won the Sony Gold for current affairs in 1997.

Born in Lagos, Nigeria and educated at Trinity College, Cambridge, where he was President of the Cambridge Union, Edward Stourton started his career as a graduate trainee at Independent Television News. He was a founder member of the Channel 4 News team, and after two years of general reporting (including several tours of Beirut) he was appointed as Channel 4's first Washington Correspondent in 1986, covering the final years of the Reagan presidency and the 1988 presidential campaign. Later that year, he moved to France to join the BBC's new Paris Television bureau, before returning to ITN as a Diplomatic Editor in 1990.

During the subsequent three years he covered the superpower negotiations which ended the Cold war, developments in the European Union - including the Maastricht Summit - the crisis in Bosnia and the Gulf War, when he worked in Baghdad during the allied attack.

In 1993, Edward returned to the BBC to present the One O'Clock News, which he did for six years until he joined the team on the Today programme in 1999. Edward has also written and presented several highly-acclaimed TV documentaries. In 1997 he presented Absolute Truth, a landmark four-part series for BBC2 on the modern Catholic Church, and wrote a book of the same name to accompany the series. In 2001 he wrote and presented both the television and radio obituaries for Cardinal Hume, and the documentary series In The Footsteps Of Saint Paul, In the Footsteps of Moses and In the Footsteps of Mohammed, transmitted by Radio 4.

Edward Stourton has also presented editions of Assignment and Panorama. He has also hosted live coverage of events such as the trooping of the colour in 2001 and the BBC's coverage of the papal election, White Smoke - The Election Of A Pope, in 2005.

Clients often ask about purchasing books for giveaways and delegate packs. Below you’ll find a selection of products by Edward Stourton. Click the images to view on Amazon's website. For bulk orders, please speak with your Booking Agent.

How to book Edward Stourton for your event