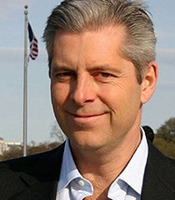 Justin Webb is one of the BBC's leading broadcasters and currently co-presents Radio 4's flagship breakfast show the Today programme.

Between 2001 and 2009 he was based in Washington DC. As the BBC's North America Editor, the eight years Justin spent on the other side of Atlantic was bookended by some of the most powerful events in US history including the attacks of 9/11 and leading the BBC's coverage of the 2008 US Presidential elections, and Barack Obama's first moves as America's 44th President. However, despite writing on his blog ‘Justin Webb's America' that there was nowhere in the world he would rather be than Washington DC, the lure of bad weather and 3am starts persuaded him to relocate to the UK and once-again join the Today programme.

Prior to joining Radio 4's Today programme in 2009, Justin Webb secured the only British TV interview with President Obama in The White House. In his after dinner talk Justin describes some of the difficulties facing Obama, what singled him out from previous incumbents and how his incredible self-belief sometimes failed to translate into effectiveness on the ground.

Justin Webb joined the BBC as a graduate trainee in 1984 working in Northern Ireland for BBC Radio Ulster based in Belfast. After leaving Today, he worked as a foreign affairs correspondent based in London covering news around the world. He then presented the BBC news - moving from Breakfast to the Six O'Clock News - during which time he interviewed prime ministers John Major and Tony Blair. There then followed three years working as the BBC's Europe correspondent based in Brussels before being posted to Washington as the chief radio correspondent in 2001.

Justin is the author of several books. In 2011, he published “Notes on Them and Us: From the Mayflower to Obama – the British, the Americans and the essential relationship”. Here, he argues that there is a fault line in the long-standing marriage between these two great nations; a cultural divide that separates us. For Justin, recognising this divide, even celebrating it, is the key to a rich future collaboration. His latest book,”Cheers, America: How an Englishman Learned to Love America”, was published in 2013.

Justin was educated at Sidcot school, Somerset and graduated from the London School of Economics with a degree in economics

Justin Webb is a highly versatile and accomplished conference moderator and awards host, and a charismatic, gifted and engaging after dinner speaker.

In his light-hearded after dinner talks Justin reveals the truth about America and Americans — as in his books “Have A Nice Day” and “Notes on Them and Us” reveals — and he has great fun demonstrating some of the nuances and differences in interviewing techniques between ‘old style’ and ‘new world’ journalists. Justin has unprecedented insights into US politics and the trans-Atlantic relationship. His analysis of American politics, and its potential to self-destruct, is highly topical.

I wanted to offer a final thank you for your contribution at our dinner in Birmingham. Apart from my own obvious views, the feedback we've gathered has been universally positive - especially about choosing you to speak. And it's not all about content, as you know - engaging people is crucial, as you clearly did.

Justin Webb was extremely accommodating. His speech was very appropriate, informative and humorous. He captured the audience completely, there was dead silence as they agreed, sighed and laughed in all the right places.

Thank you so very much for taking part in our Conference last Thursday at the Royal Society. We have already received some wonderful feedback from many of the delegates about the quality and content of the speeches, presentations, and your excellent skills as the conference Chair helped to make it a really great event all round. On behalf of everyone here at the ABPI, I'd like to thank you again for making our Conference such a memorable day.

Association Of The British Pharmaceutical Industry.

Justin chaired this conference exceptionally well. He was professional, prepared and brought a real energy to every session he was involved in. He was very well received by the delegates and built a good rapport over the two days.

I just wanted to say thank you for arranging Justin Webb to attend the conference last week. The initial feedback has been fantastic and they thought Justin was great and charming.

Clients often ask about purchasing books for giveaways and delegate packs. Below you’ll find a selection of products by Justin Webb. Click the images to view on Amazon's website. For bulk orders, please speak with your Booking Agent.

How to book Justin Webb for your event