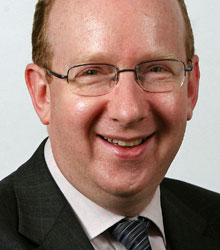 Lord Daniel Finkelstein OBE is a columnist and Associate Editor of The Times, having previously been its Executive Editor and Chief Leader Writer. He is also a member of the House of Lords and an advisor to the Conservative Party.

His writing is mainly on political and social affairs, although he is also well known for his football column, the Fink Tank, which ran for 17 years. He has won multiple awards, including being named political commentator of the year four times. He is well known to viewers of programmes like Newsnight and Politics Live and to listeners of Radio 4’s The News Quiz.

Daniel was educated at University College School and graduated from the London School of Economics with a BSc in 1984. He began his political career as a member of the short-lived Social Democratic Party in the 1980s, rising to become the chairman of the Young Social Democrats.

He was a Parliamentary candidate in the 1987 general election and one of SDP leader David Owen's closest advisers. However, he denounced the merger with the Liberal Party, which became the Liberal Democrats, and after Owen resigned from front-line politics, Daniel defected to the Conservative Party.

After serving as director of the Westminster think tank, Social Market Foundation, for three years in the early 1990s, focusing on social policy, between 1995 and 1997 he was Director of the Conservative Research Department.

During his career, Daniel Finkelstein has provided political advice to prime ministers John Major, David Cameron and Theresa May and, as director of policy, to William Hague as opposition leader. He has been on the inside of many budgets and prime ministers questions, attended meetings of Cabinet and has been secretary to the Shadow Cabinet.

He was also the Chairman of the Policy Exchange, an independent charity seeking free market and ‘localist’ solutions to public policy questions. Following a brief spell in data communications, Danny joined The Times, started their blog and worked his way up to the leader columns.

Daniel also writes a highly regarded and very distinctive statistics-based football review and pens regular columns for The Jewish Chronicle. His mother Mirjam Wiener went to school in Amsterdam with one of the abiding symbols of the Holocaust, Anne Frank, and his grandfather Alfred established the world's oldest institution dedicated to its study. Daniel's family history is a parable for the surviving communities of European Jewry - incarceration, escape, safety.

He was named political commentator of the year at the Editorial Intelligence Comment Awards 2010, 2011 and 2013.

Danny was awarded the OBE in the 1997 honours list for services to the prime minister, and granted a peerage in 2013, where he sits in the House of Lords as a Conservative peer.

As a prominent television and radio commentator, Lord Daniel Finkelstein presents sharp, entertaining and insightful speeches, discussing the current political scene as well as giving his opinions and perspective on the future and what the effects might be on UK business.

How to book Lord Daniel Finkelstein OBE for your event

To book Lord Daniel Finkelstein OBE, please submit an online enquiry, email bookings@nmp.co.uk or speak with one of our booking agents on +44 (0)1372 361 004.