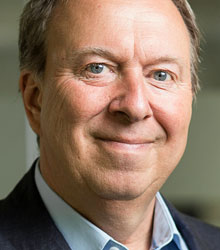 A distinguished broadcaster and columnist, Steve Richards provides political, media and policy analysis. Established as one of the most influential and distinguished political commentators in the country, he is also a broadcaster, author and performer of Rock N Roll Politics, his one man show which he regularly takes on tour.

He writes political columns for the Independent and has written for the Guardian, Times, New Statesman, Spectator and TLS. He presents BBC Radio 4's Week in Westminster and presented GMTV's live Sunday programme for ten years.

Steve was a BBC Political Correspondent and is a regular pundit on BBC's Today and Newsnight programmes and SKY News. His book ‘Whatever It Takes‘ was nominated for the Orwell Prize and the accompanying series for Radio 4 was nominated for a Sony. He has also written and presented documentaries on David Cameron, Nick Clegg and Ed Miliband.

He is a regular guest on BBC Radio 4's Today programme, and has appeared on Any Questions, Question Time and Andrew Neil's Politics Show. For several years he was a presenter of BBC2's Despatch Box and was a BBC Political Correspondent who reported on the fall of Margaret Thatcher and the rise of Tony Blair.

In 2017, Steve Richards presented a series of television talks on modern Prime Ministers entitled Leadership Reflections, with episodes about Harold Wilson, Margaret Thatcher, Tony Blair, Gordon Brown, and David Cameron, broadcast on BBC Parliament. And later that year, presented another series of reflections, this time on major political "Turning Points"; six episodes about the 1979 general election; the rise of the SDP; the death of John Smith; the financial crash of 2008; the Brexit referendum; and the 2017 general election.

His book on New Labour, Whatever It Takes, was turned into a BBC Radio 4 series thanks to his shrewd observations of the Westminster and Whitehall scene.

Steve Richards is an accomplished after dinner speaker and performer of his one man show Rock ‘N ‘Roll Politics, where he takes his audiences behind the scenes of British politics, conveying the high theatre, epic personal dramas of an election year, plus the absurdities, the comedy and the tragedies.

He makes audiences laugh and cry as they are taken on a whirlwind tour from Harold Wilson and David Bowie in the 1970s to David Cameron, Nick Clegg and Ed Miliband, via Paul McCartney and Tony Blair.

Broadcaster turned parliamentary candidate Dame Esther Rantzen had described Steve as the “most entertaining political speaker in the UK” and Martin Bell says of him, “Steve is as entertaining as John Sergeant”, a comparison that is surely a compliment.

In addition to after dinner speaking, Steve Richards has also chaired major political conferences and has spoken on politics as a guest at conferences.

The most entertaining political speaker in the UK.

Witty, lyrical and above all insightful, the show has demonstrated a staying power which will please all of us who want to see more of this promising new form of live performance.

Just brilliant. Feedback has been terrific.

Clients often ask about purchasing books for giveaways and delegate packs. Below you’ll find a selection of products by Steve Richards. Click the images to view on Amazon's website. For bulk orders, please speak with your Booking Agent.

How to book Steve Richards for your event