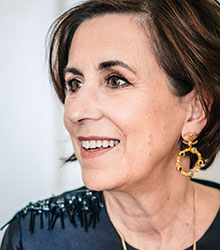 Kirsty Wark is one of Britain's most highly regarded and versatile presenters. She joined the BBC as a graduate researcher in 1976 for BBC Radio Scotland, going on to become a producer in radio current affairs.

After a spell on Radio 4's The World At One, Kirsty moved to television in 1983 - working as a producer on Reporting Scotland and later producing and presenting the current affairs weekly Seven Days. Kirsty has interviewed many top politicians - from Tony Blair in January 1996 to Margaret Thatcher in 1990.

Kirsty presented the 1987 General Election in Scotland and the three subsequent elections. She has also presented several major OB's and the openings of the Tate Modern and the Scottish Parliament. From 1990-1993 she presented the Arts programme The Late Show and in 1993 fronted the popular BBC heritage series One Foot In The Past - a role she continued into 2000.

Forming the independent television production company Wark Clements & Co with Alan Clements in 1990, she then presented much of the company's output, including Words With Wark, Restless Nation, Building A Nation, The Kirsty Wark Show, Lives Less Ordinary and Tales from Europe.

Kirsty was named journalist of the year by BAFTA Scotland in 1993 and Best Television Presenter in 1997. In addition, Kirsty was chosen as Scot of the Year 1998 - sponsored by Scotland On Sunday & Glenfiddich – and was awarded the 1999 News and Current Affairs prize by Carlton Women in Film and Television.

She was also nominated for the prestigious Richard Dimbleby Award for Best Television Presenter (Factual, Features and News) in the BAFTAS 2000. Kirsty was born in Dumfries and educated in Kilmarnock. She is married to Alan Clements and has two children.

Kirty has chaired a host of conferences, award ceremonies and voiceovers for clients including Cambridge MIT Institute, Proctor & Gamble, RSA Arts Council and the NHS.

Another fabulous performance. Thank you so much for holding it all together yesterday and making all the links between the various participants. It is the most crucial role of the day and you were brilliant as ever. You make our job so easy and we have really appreciated your interest and involvement in this ongoing project. Your briefing to the other participants was most helpful and knowing you could step in at any moment, if we needed, gave us so much comfort... Thanks again for another wonderful day.

Kirsty, I just wanted to thank you for the sterling job you did last week. I had hoped that the event would be an inspiring and lively debate on key issues that affect women globally and I'm delighted that it was! As it was the first event, there were a lot of expectations to meet. I am thrilled at the responses from the delegates who attended and I am really grateful for your support, insight and fascinating observations. ..I am grateful to you for chairing the panels so smoothly and effectively. Thank you for making the day so successful – we have had tremendous feedback... I hope to work with you again in the future.

The Inaugural Women of The Future: Economic And Empowerment Summit

Kirsty Wark chaired the event superbly... she was a delight to work with and we'd be thrilled if she would take part in another event for [us] sometime in the future.

How to book Kirsty Wark for your event