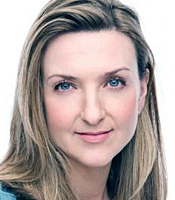 Victoria Derbyshire is an award-winning journalist and broadcaster. Until 2020, she presented her own news and current affairs show every weekday morning from 10am on BBC1. And prior to that she presented a Radio Five Live show which was nominated for Sony Awards in 2007 and 2008, and in 2010 won a silver award for Best News and Current Affairs Programme. Victoria herself won Silver for Speech Broadcaster of the Year. The following year, she was tripled-nominated.

Victoria is also a regular on Lorraine on ITV1, as well as reporting for BBC1 on The One Show and Watchdog. Victoria's other television presenting credits include SportTalk (Channel 4), Late Night London (Carlton) Central Weekend (Central TV) and The Club (BBC One). She has also appeared on The Apprentice: You're Fired (BBC One) and Faking It (Channel 4)

Until 2004 Victoria was co-presenter of Five Live Breakfast (BBC Radio Five Live) which picked up the Sony Gold award for Best Breakfast Programme both in 1999 and 2002.

At the Sony Awards, May 2011, Derbyshire won the Gold award for Best News & Current Affairs Programme, The judges said Victoria was "an outstanding & versatile presenter with an appealing determination to get to the heart of a matter". She also won silvers in the Speech Broadcaster of the Year category & in the Speech Programme category.

Victoria is also a regular contributor to The Times.

Victoria Derbyshire did a great job - she was exceptionally professional and great to work with... The client was delighted and the managing partner said he would definitely use her again in the future. Please pass on our thanks and thanks for all you did to smooth the way too!

How to book Victoria Derbyshire for your event

To book Victoria Derbyshire, please submit an online enquiry, email bookings@nmp.co.uk or speak with one of our booking agents on +44 (0)1372 361 004.