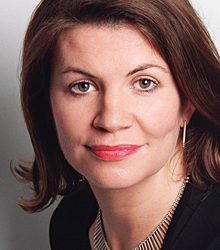 Julia Hartley-Brewer is a highly respected journalist and broadcaster. From 2011 - 2014 she was the presenter of LBC 97.3 radio's weekday afternoon show and is a former columnist and Political Editor of the Sunday Express, where she held the position for seven years. She previously worked at The Guardian and the London Evening Standard.

Julia began her career in journalism at the East London Advertiser in Bethnal Green - where on numerous occasions she answered calls from Reggie Kray ringing from Maidstone Prison - before leaving for the more glamorous role of reporter on Londoner's Diary at The Evening Standard, later becoming a news reporter and political correspondent with the paper. She then moved to the role of political correspondent at The Guardian, where she remained until 2000.

A respected political commentator, Julia Hartley-Brewer is a regular pundit on both television and radio, including Sky News, the BBC News Channel, Radio 5 Live, Radio 4′s Today and PM programmes, The One Show and ITV's Tonight programme. Julia is also a regular guest panellist on the BBC comedy panel show Have I Got News For You as well as appearing on Question Time and Radio 4's Any Questions and The News Quiz.

An engaging, entertaining and topical after dinner speaker, Julia Hartley-Brewer shares her intimate knowledge of Westminster and the wheels of politics with charm, humour and candour.

Julia is also available as a versatile and accomplished conference host and moderator.

The event went really well thanks. Julia is such a lovely lady and did a lovely and funny speech after dinner for us.

How to book Julia Hartley-Brewer for your event