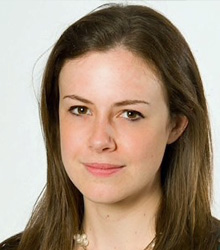 Isabel Hardman is Assistant Editor of the Spectator magazine and presenter of Radio 4’s The Week in Westminster. In 2015, she was named the youngest ever Political Journalist of the Year by the Political Studies Association.

She regularly writes political columns for a number of other publications, including The Times, Sunday Times, Observer, Sun, Evening Standard, and the Independent.

Isabel began her career in journalism as a senior reporter for Inside Housing magazine. She then became assistant news editor at PoliticsHome. In 2014, GQ magazine named her as one of their 100 most connected women in Britain.

Isabel has been based in the parliamentary press gallery for four years, and is also a regular guest on programmes such as the Andrew Marr Show, Newsnight and the Today programme. She has appeared on Question Time, Have I Got News For You and The News Quiz. Previously she was Assistant News Editor at PoliticsHome.comand her first job was as a reporter on Inside Housing magazine.

Isabel’s first book, Why We Get the Wrong Politicians, was published by Atlantic in 2018.

Clients often ask about purchasing books for giveaways and delegate packs. Below you’ll find a selection of products by Isabel Hardman. Click the images to view on Amazon's website. For bulk orders, please speak with your Booking Agent.

How to book Isabel Hardman for your event