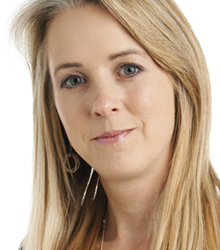 Isabel Oakeshott is a political journalist and commentator, currently Political Editor At Large of the Daily Mail.

She was Political Editor of the Sunday Times (2011 - 2014) when she left the paper to work full time on ‘Call Me Dave’, the 2015 sensational unauthorised biography of former Prime Minister David Cameron. Written with former deputy chairman of the Tory party Lord Ashcroft KCMG, and based on interviews with several hundred sources, the book attracted global publicity. Rights were sold to the Daily Mail for a six figure sum, with royalties donated to military charities supported by Lord Ashcroft. The newspaper described the biography as the “political book of the decade.” Further extracts were serialised by The Sunday Times.
Based in the Houses of Parliament, where she was a member of the parliamentary lobby for almost a decade, Isabel has been working at Westminster since 2005. In 2012, she won Political Journalist of the Year at the UK Press Awards. It followed her exclusive story about the former energy secretary Chris Huhne and penalty points for speeding, which eventually led to his resignation from cabinet and a sensational criminal trial.   Over the years, Isabel Oakeshott has interviewed most of the cabinet, including the prime minister, as well as Mayor of London Boris Johnson, Leader of the Opposition Ed Miliband, and most of the shadow cabinet.   From 2012 to summer 2013, Isabel had a regular slot on BBC1's Sunday Politics show, hosted by Andrew Neil. She now provides political commentary for programmes including Radio 4's Today and Women's Hour; the Media Show; BBC2'S Newsnight; as well as for BBC Radio 5 Live, LBC radio and Channel 5. She recently appeared on BBC1's Question Time.   In 2010, Isabel Oakeshott ghost wrote Inside Out, an explosive insider account of Gordon Brown's regime based on the experiences of Peter Watt, former General Secretary of the Labour Party. Watt spilled the beans on cash for honours, Brown's failure to call an election, and the precarious state of the party's finances. The book was the subject of a fierce bidding war for newspaper serialisation rights.

Her second book, Farmageddon was an expose of the grim realities of industrial food production. A collaboration with the charity Compassion in World Farming, it was published by Bloomsbury in January 2014.   Isabel began her career on a local newspaper — the East Lothian Courier — in Scotland. From there she moved to the Edinburgh Evening News, then on to the Daily Record and has had staff jobs on the Daily Mail, the London Evening Standard and the Sunday Mirror.   Isabel was educated at Gordonstoun, where she was on a scholarship, and read History at Bristol University. She lives in London and the Cotswolds with her husband and three children.

Isabel Oakeshott is an experienced public speaker and respected commentator on the UK political system. In her speeches she provides unique insight into all areas of Westminster and across all political parties.

She has worked for a wide range of clients and audiences, including UBS Investment Bank; Weber Shandwick; Fleishman Hillard; the Independent Schools' Bursars Association; and PCG, the association of freelance workers.

Isabel Oakeshott is one of FleishmanHillard's most insightful and as such, regular, guest speakers. Her sound understanding and reading of political issues places her on the A-List for any organization that wants to get a definitive analysis of events in the corridors of power

Many thanks again for making the time available to join our main London equities conference. We have had terrific feedback from our investor base which reflects the quality of the speakers and panel discussions.

What an inspiring speaker and role model. I found the presentation extremely interesting and felt she fielded questions expertly. Superb! One of the very best, on every level. What more can I say! Thank you so much for your inspired recommendation.

Isabel Oakeshott stole the show! Great stuff, our audience really loved it. Just what we needed. I think Isabel will get at least 2 enquiries for further work and we will definitely bear her in mind for future 'gigs’! We had so little time to familiarise Isabel with our zany world, but she read it right!

Clients often ask about purchasing books for giveaways and delegate packs. Below you’ll find a selection of products by Isabel Oakeshott. Click the images to view on Amazon's website. For bulk orders, please speak with your Booking Agent.

How to book Isabel Oakeshott for your event