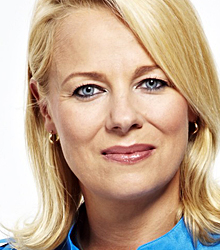 Daisy is a TV presenter, reporter and writer. She is an accomplished corporate facilitator and host, having hosted countless awards and moderated many conferences for a wide variety of clients – including many large multinationals, trade bodies and charities.

She left ITV News to go freelance in December 2012 after a very successful seven years during which time she was their most senior female reporter, having been Chief Political Correspondent, Economics Editor and Special Correspondent.

As Economics Editor she reported on the credit crunch and recession from all over the UK as well as in-depth reports on the German and French economy.
As well as reporting for ITV News she also presented their Lunchtime and Weekend News and ITV's Moral of the Story.

Before joining ITV she presented (as Daisy Sampson) for the BBC's Daily Politics and was BBC Breakfast News' Political Correspondent.

Daisy was the host of the O2 Business Show on LBC 97.3 in 2013 which was a weekly discussion with leading British business experts designed to help you learn new business tricks and help grow your business. She currently reviews the papers for both BBC and Sky news.

She has also presented her own drive time show on LBC Radio and has presented Channel 4′s Powerhouse, the BBC's Heaven and Earth Show and BBC Weekend News. She also presented TV on Trial in 2005 with John Sergeant.

Daisy has appeared regularly on Have I Got News for You?, The Wright Stuff, Loose Women and Despatch Box as well as many Radio 5Live programmes. She is a familiar face on ITV's This Morning and Daybreak as a regular news reviewer.

Before moving into broadcasting in 2001, she spent a decade working in Westminster, starting off as a 19-year-old Tory researcher before writing for many newspapers from the Press Gallery, profiling MPs in The House Magazine – which she ultimately edited – as well as working for Lib Dem Leader Charles Kennedy as his Press Secretary.

She was a consultant on the BBC's A-Z of Politics and edited The Politics Companion, published by Chrysalis books.

Daisy's interests include all aspects of business and political life, parliament, social affairs, the economy and business. However, she also has a wide range of other interests which she writes about and comments on ranging from all aspects of family life and children's issues to penal reform, dogs and horses, motorbikes, interior design, party and planning and juggling life as a busy, working Mum.

She lives in North London with husband John McAndrew – Associate Editor at Sky News – and their two children.

Daisy McAndrew supported an event of Samsung's back in the summer of 2013 & absolutely hit the mark in her ability to put an audience at ease, share knowledge, & professionally introduce various speakers. Her wit & charm became the glue that brought all the components of the event together & as a result the response we got from our customers was excellent. We were so impressed with Daisy's performance that we had no hesitation in asking her to support the next iteration of the event the following summer. If you need a trusted & experienced pair of hands that is going to maximise your brand's presence & offering, look no further than Daisy.

It's great to work with Daisy McAndrew as she makes my day so much easier than it would bE otherwise! Her grasp of the issues and energy on stage made this year's event informative, engaging and entertaining too

Daisy McAndrew has chaired two of our national conferences and has been a superb asset to each event. She is a delight to work with, can think on her feet and has the audience gripped throughout. Her impressive broadcasting background gives her immense political and economic knowledge through which she can add great input to live discussions and Q&A sessions. She is professional, reliable, upbeat and a great asset to any corporate event.

Daisy McAndrew hosted our ThinkFM 2015 Conference and made it an amazing success. The feedback we have received from delegates and partners was positively overwhelming and her support enabled us to create a stimulating and vibrant event... On the day the event hit the top ten on Twitter and started trending in the morning with over 3000 tweets and reaching nearly 850,000. This simply would not have been possible without her support.

Daisy McAndrew's performance, professionalism and warm personality ensured that the facilitation played an important and influential part of the whole day. We had great delegate feedback regarding her role and the extent to which she managed to control proceedings. We can't thank her enough, she carried it all off in such style. We wouldn't hesitate to recommend her as a facilitator.

She was fantastic. She stepped in a couple of times when the moderator hesitated; this really helped it not go flat etc. She'd done loads of research as well...

How to book Daisy McAndrew for your event