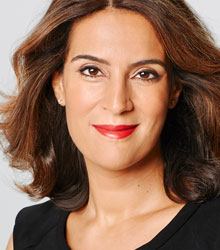 Samantha Simmonds has been a journalist and broadcaster for more than 20 years, currently presenting on the BBC News Channel and BBC World News, covering breaking news stories and international and national events of the day. She also presents Sunday Politics on BBC 1 and on BBC Radio 4 – hosting its ‘One to One’ series.

She presented on Sky News for more than a decade, anchoring coverage of some of the biggest stories of recent years. These included the murder of British MP Jo Cox, the EU referendum live from Gibraltar, several general elections and the terror attacks in Tunisia and Brussels. She also broke the news of the sudden deaths of Michael Jackson, Amy Winehouse and Heath Ledger.

Samantha’s highlights while at Sky including presenting on location at Buckingham Palace for the Queens’s 90th Birthday, at the Olympic Park for the London 2012 opening ceremony – her husband was in fact one of the volunteers in the ceremony!

She also loved presenting from outside Buckingham Palace during the royal wedding – reporting on ‘The Kiss’ and interviewing people who had travelled from all over the world to be there.

Samantha Simmonds loves the challenge of handling live breaking news and dealing with the biggest events of the day – interviewing senior politicians, business leaders, celebrities and ordinary people often at the centre of shocking events.

On the BBC and at Sky Samantha’s more relaxed presentation skills can be seen when hosting the evening paper review. It allows her the opportunity to demonstrate a chattier more informal style of presenting – discussing and dissecting stories of the day, often having to act as referee between guests with very opposing views.

Samantha’s blog about parenting and issues around women in the work place have gained a huge following are often featured in the national press. She is also a contributor to the Huffington Post website and is regularly asked to appear on daily TV and radio programmes to comment on parenting and women’s issues.

Samantha discovered her passion for journalism while writing for Liverpool University student newspaper. While at Uni Samantha became a contestant on ITV’s Blind Date – choosing Zenon from Inverness for their date in Capri in Italy. Whilst she didn’t find love she did get her first taste of appearing on TV – and although terrified – she loved the experience of seeing behind the scenes of how TV was actually made!

After completing a degree in History and Communication Studies, Samantha secured a place on the prestigious postgraduate course in Broadcast Journalism at City University.

She earned her stripes as a local radio reporter in the North of England and then became a TV news producer first at Channel 5 news and then at the BBC, eventually becoming a reporter for BBC Breakfast and BBC London News. She got her first break in presenting when the overnight presenter went sick and she was asked to step in at the last minute, and she has never looked back.

Along the way Samantha was one of the first journalists from the UK to cover the post 9/11 events on the ground in New York. She was also quickly on the scene of the Edgware Road bombing on July 7th interviewing survivors as they emerged from underground.

Samantha loves the challenge of handling live breaking news and dealing with the biggest events of the day – interviewing senior politicians, business leaders, celebrities and ordinary people often at the centre of events such as eyewitnesses to the shootings in Ontario and survivors of the 2011 Norway massacre.

Samantha Simmonds has a reputation for bringing personality, energy, warmth and humour to corporate and motivational events at which she hosts or speaks.

Business Speaking
Her keynote speaking engagements to-date include hosting topical and lively debates with leading experts in their field, speaking at City firms about her career and the challenges for working parents. She also presents motivational career talks for teenagers at schools.

She delivered a talk in Oslo for the Gyldendal publishing house on the phenomenon of “Fake News” and was the guest speaker at Cityparents annual forum talking about the “Work Life Balance Myth”. She has also spoken to Deloitte in Oslo about Brexit and Bird & Bird law firm about her career in the media and journalism.

Samantha is particularly passionate about speaking on or joining debates about the difficulties in the job market, especially for young women and mothers. As a working mother, Samantha understands the difficulties faced by women and admits she struggles herself with juggling the demands of family and her career.

She also has a passion for responsible travel having travelled around Vietnam and Cambodia with a sustainable travel organisation focusing on the local community.

She has also hosted the regional investment fund forum for the Department of International Trade alongside Secretary of State Dr Liam Fox, the Sainsbury’s Living Well Forum alongside it’s CEO Mike Coupe, the Police Federation Conference and Hewlett Packards prestigious 100 Club in Barcelona alongside its CEO Meg Whitman.

Samantha has twice hosted the prestigious Techmark awards in central London and presented at the Asian Curry Awards. She has also spoken at Highgate School and was invited back to her former school, the Grammar School at Leeds, to be their guest of honour at their prize giving and deliver their keynote speech.

Samantha recently hosted a session for us on the highs and lows of her demanding career in media. She also talked about career goals, getting ahead and work life balance. Samantha was an engaging and interesting speaker and we’d happily welcome her back.

A big thank you Samantha, you really helped indeed to move the 100 Club a notch higher this year.

We found Samantha very professional and easy to work with. She followed our briefing very closely and proved to be an ideal facilitator.

Everyone is effusive in their praise, and speaking warmly of how well you came across in your speech.

How to book Samantha Simmonds for your event