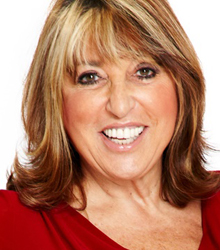 Eve Pollard, journalist and media commentator, is often referred to as ‘The First Lady of Fleet Street'. She was one of the first female editors of a national newspaper in the UK, editing the Sunday Mirror from 1987-1991 and the Sunday Express from 1991-1994.

In 1985 Eve was launch editor-in-chief of Elle Magazine in the US and edited the Sunday magazine for the News of the World and You Magazine for the Mail on Sunday. She was the features editor for TV-AM and also devised the series Frocks-on-the-Box for TVS which ran for two series, twenty six shows in total. Eve also appeared as a regular participant in Sir David Frost's daytime celebrity panel show Through the Keyhole. More recently, she has appeared on Loose Women, Radio 4's The News Quiz, This Morning, Have I Got News For You, The Daily Politics Show and is a regular reporter for The One Show. She is also regularly seen reviewing the newspapers on various current affairs television programmes.

Eve Pollard was ITV's correspondent for the Royal Wedding of William and Catherine in 2011 and was part of the ITV team again in 2012 for the Diamond Jubilee coverage and will shortly be seen reporting on the birth of our new Royal baby. She has been a member of the Competition Commission's Newspaper Takeover Panel appointed in 1999. Her publications include Jackie, a biography of Jacqueline Kennedy Onassis (1971), and four jointly written novels: Splash (1995) Best of Enemies (1996), Double Trouble (1997) and Unfinished Business (1998).

Eve has become increasingly frustrated by the lack of stylish clothes available for older women and has recently launched her own designer range of dresses. She is also an active supporter and campaigner for the promotion of women's health, and is vice-chairman of the Wellbeing of Women charity.

Eve Pollard was appointed Officer of the Order of the British Empire (OBE) in the 2008 Birthday Honours.

Eve Pollard is a highly popular and in-demand after dinner speaker - with insightful anecdotes and amusing stories from her days in Fleet Street and treading the corridors of power, recalling her dealings with the likes of Margaret Thatcher, Rupert Murdoch and Tony Blair. She is also a much sought-after conference facilitator and event host.

Clients often ask about purchasing books for giveaways and delegate packs. Below you’ll find a selection of products by Eve Pollard OBE. Click the images to view on Amazon's website. For bulk orders, please speak with your Booking Agent.

How to book Eve Pollard OBE for your event