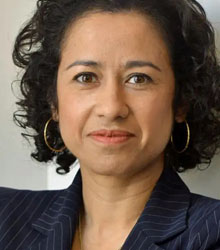 Samira Ahmed is a multi award-winning journalist and broadcaster and a visiting professor of Journalism at Kingston University, with a special focus on culture, politics and social change.

Samira presents the weekly programme Newswatch on BBC One and is one of the main presenters of the BBC Radio 4 Arts programme Front Row, for which she won Audio Broadcaster of the Year at the 2020 British Press Guild Awards.

She also makes regular documentaries, including BBC Four’s three part series, The Art of Persia, filmed in Iran and broadcast during 2020. Samira's radio documentaries include Laura Ingalls' America, John Ruskin's Eurythmic Girls, I Dressed Ziggy Stardust, HG Wells and the H Bomb, Riding Into Town (about her love of Westerns) and The Fundamentalist Queen (about the life of Oliver Cromwell's wife).

Samira writes regularly on culture and politics in newspapers and magazine including The Guardian, Radio Times, The New Statesman, The Mail on Sunday and The New Humanist. She presents television coverage of the Proms on BBC4 and previously presented two series of the BBC1 ethics discussion programme, Sunday Morning Live.

Her other BBC Radio credits include Radio 3's Free Thinking, Radio 4's Something Understood, PM, The World Tonight, Profile and Sunday. She was runner up for interview of the year at the Sandford St Martin awards 2016 for her Heart and Soul interview with Terry Waite.

Samira was previously a presenter and correspondent at Channel 4 News, where she won the Stonewall Broadcast of the Year award for her investigation into rape in South Africa and she made the Channel 4 documentary series "Islam Unveiled" about the status of Muslim women around the world. She has been a reporter on and also presented Radio 4's Today Programme.

On Newsnight she uncovered a major charity scandal, and was one of the first journalists to investigate the emergence of radical Islam at British universities. She also covered the OJ Simpson case as BBC's Los Angeles Correspondent.

Her natural competitive streak found an outlet when she won Celebrity Mastermind in 2010 and again in a Champion's edition in 2019. Samira read English at St Edmund Hall, Oxford University and started her career as a BBC News Trainee and was made a honorary fellow of Oxford University in 2018. She speaks German and Hindi/Urdu.

Samira Ahmed is a highly sought after conference chair, interviewer and professional live panel moderator for a range of arts, business and state organisations, and lectures regularly on journalism at universities and schools, using TV and new media clips for lively and engaging talks, tailored to each class or audience.

Her private conference and presentation work ranges across a broad range of subjects including cultural discussions and book launches with directors, authors, actors and historians for The British Museum, The Theatres’ Trust, the Southbank Centre, The British Council and the British Film Institute National Theatre Live and The Royal Shakespeare Company.

She specialises in events around science, culture and public engagement and has worked on films, debates and curated events for The Royal Institution, The Science Museum London, The British Science Association and Humanists UK where she chairs the annual Rosalind Franklin lecture.

Samira Ahmed has extensive experience in chairing public policy events around tackling violent extremism, child poverty and serious organised crime for a number of government departments since 2001 including for the Home Office, the Foreign and Commonwealth Office, the Department for International Development and the Trades Union Congress.

She presented the Civil Service Awards for the Cabinet Office for the 5 years from their inception till 2010. She interviewed the then Deputy Prime Minister Nick Clegg and chaired a well received Q & A about plans to slash jobs and pensions at Civil Service Live.

Thank you once again for the excellent job you did as Facilitator at the 'Age Diversity in the downturn' Conference last Friday. Both the Commission and ourselves were delighted by the way you 'time-managed' the 10 different speakers and the panel discussions that followed.The questions you posed were right on target and the way you drew in each of the speakers and put them on their mettle - but in a non-confrontational way - was a great example of the interviewers art.

You struck just the right balance between personal and professional anecdotes and insights, and the international links were spot on. Having digested the evaluation forms, I know that the conference participants were especially inspired by your integrity and by the warmth of your delivery. The evaluation feedback was glowing. Your session made a substantial contribution to the success of the whole event.

How to book Samira Ahmed for your event