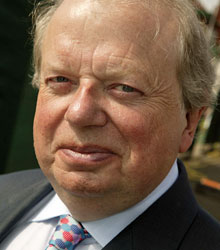 John Sergeant is a successful author and freelance journalist, having spent more than twenty years as Senior Political Correspondent at Westminster.

John joined ITN in March 2000 as Political Editor, taking over the role from Michael Brunson who retired after 32 years with ITN. In 2001 John reported on his eighth General Election campaign - his first for ITN. On Election night itself he brought his vast political experience to bear as co-presenter on ITV's Election 2001 programme - alongside Jonathan Dimbleby.

He has reported on all the main key political issues of the day both at home and abroad for ITN, including the G8 Summit in Genoa and the EU Summit in Stockholm when John was responsible for breaking the story of Tony Blair's conversation with Romano Prodi during which he mentioned that the upcoming General Election would be postponed due to foot and mouth. He also reported from Camp David on the first meeting between Blair and President George Bush.

Soon after his arrival at ITN John was voted the Best Individual Television Contributor of the Year at the Voice of the Listener and Viewer Awards for 1999. John Sergeant had been the BBC's chief political correspondent from 1988-2000. He joined the corporation as a radio reporter in 1970 and covered stories in more than 25 countries. He worked as a war correspondent in Vietnam, Cyprus, Israel, and Rhodesia. He also regularly reported from Northern Ireland (he reported the first British soldier killed during the recent troubles) and has also been an acting correspondent in Washington, Paris and Dublin.

For two years he covered European affairs and the first sessions of the directly elected European Parliament. He wrote and presented a BBC TV documentary series called 'The Europe We Joined'. He has also presented on all the main current affairs programmes for BBC Radio 4, including 'Today' and 'The World at One'. In 1981 he became the political correspondent for television and radio.

John's first taste of television came in 1966 when he appeared in the award-winning BBC TV comedy series 'On the Margin' with Alan Bennett. Alan chose him from the cast of the Oxford University comedy revue at the Edinburgh Festival. John had already been accepted as a news trainee with Reuters but gave that up to work with Alan. He went back to journalism the year after and spent three years as a reporter on the Liverpool Echo before coming to London to join the BBC in 1970.

John Sergeant's career in light entertainment lay dormant for many years while he built up his image as a serious political correspondent but in 1998 his comedy career was revived when he appeared in an edition of 'Have I Got News For You' on BBC 2. Ian Hislop said he had been one of the funniest guests in the history of the programme and in 2002 John was invited to present the show.

Today John spends much of his time concentrating on writing books and doing freelance journalistic and broadcasting work. He continues to guest on shows as varied as 'Have I Got News for You' for BBC Television and 'The News Quiz' for BBC Radio 4. He has appeared as guest presenter of BBC2's Big Read and 10 Best Sitcoms, and in 2009 caused much controversy for his dancing ability, or lack thereof, in the BBC's popular show Strictly Come Dancing.

John is a popular, entertaining and insightful after dinner speaker and awards host on the corporate circuit.

On behalf of everyone at British ORT, I'd like to thank you for your wonderful contribution to our recent Gala Dinner. The feedback we have received from our supporters was unanimously positive and included many, many comments about your speech which was a true highlight of the evening. Your political and show business anecdotes certainly hit their mark and ensured our guests left that evening with a warm glow inside.

Clients often ask about purchasing books for giveaways and delegate packs. Below you’ll find a selection of products by John Sergeant. Click the images to view on Amazon's website. For bulk orders, please speak with your Booking Agent.

How to book John Sergeant for your event