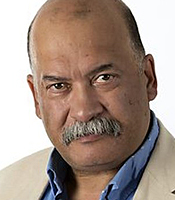 John Pienaar is the BBC's Senior Political Correspondent and presenter of Weekend News.

Described by the Radio 5 Live's controller as ‘a political heavyweight with huge credibility in the Westminster area', John features regularly on television news and as a radio voice on the award winning breakfast programme. John finds direction and meaning in the whirlwind of government spin, making him ideally positioned to provide the inside scoop on the current political scene through after dinner and keynote speaking.

When New Labour scored their second election victory, John described how the order went out to avoid embarrassing displays of triumphalism: "The Spin Doctors knew exactly what to do – they wasted no time at all papering over all the windows!"

A former Political Correspondent for The Independent, joining the paper at its launch in 1986, and working as one of the late Tony Bevins' original team. John Pienaar penned their cutting and often controversial parliamentary sketch, knowm as the Westminster Diary.

John originally trained at the South London Press, where he wrote about whatever was happening on his doorstep: urban crime, domestic violence, sex, drugs and rock'n'roll. He then became an Old Bailey Correspondent and even wrote an angling column (without ever having held a fishing rod in his life).

In a similar vein in 2003, John was all set to step into the celebrity boxing ring with Tony Hadley – until the British Boxing Board of Control put a stop to it.

John Pienaar is a sought-after and highly versatile host and chairman of conferences, and a captivating and insightful speaker on politics, current affairs and the environment.

How to book John Pienaar for your event