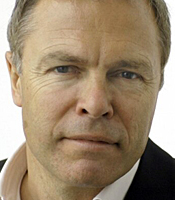 Formerly the BBC's Europe Editor from 2009-'14, Gavin Hewitt was promoted to the newly created role of Chief Correspondent for BBC News in autumn 2014. An important new addition to the existing senior editorial team, Gavin is at the forefront of the BBC's flagship programmes bringing analysis and insight to a wide range of assignments, covering major breaking news at home and abroad.

Gavin Hewitt graduated from Durham University and, after working as a correspondent for Canadian television in Toronto, has gone on to hold a series of key positions at the BBC, reporting on most major world events over the past 30 years.

Gavin was in East Berlin the night the Berlin Wall fell. Since then he has reported on the collapse of the Soviet Union and the 9/11 attacks in New York. He reported from New Orleans on Hurricane Katrina. In 1997 he wrote and presented the BBC One tribute to Princess Diana. In 2008 he covered the Obama campaign and was embedded with US forces for the invasion of Iraq. He reported on the war in Lebanon in 2006 and the war in Giorgia in 2008.

For five years from 2009-2014 Gavin Hewitt was the BBC's Europe Editor covering the tensions between the EU and the UK and the Eurozone crisis. His blog was voted one of the most influential in Brussels.

Gavin has won a string of awards for his documentary and news reports, including an RTS, a BAFTA and a Broadcast award. He is known for his effortless interweaving of the stories of ordinary people with the high drama of European politics.

A career broadcaster, Gavin Hewitt is a gifted communicator who shares his passion and insight with his audience.

As the BBC's former Europe Editor, Gavin was one of the leading commentators on the Eurozone crisis and the European Economy and is able to offer a unique and important insight into the key issues, the politics of Brussels and the challenges involved in Europe returning to growth. He is also able to speak in detail and with great insight on the ongoing Brexit debate.

Gavin has a background in North American politics and has covered most of the US election campaigns in the past twenty years. He was in the the Trump envoy in the run up to the 2016 election and has some amazing election night stories from that camp. Gavin also has rich anecdotes from having had a front seat at many of the world's major events. Drawing on his extensive international journalism experience, he regularly captivates audiences as a public, after dinner and keynote speaker, and speaks on a range of topics.

Years of reporting and analysing stories from home and abroad have honed Gavin's skills of imparting key information in a lively and engaging manner. He is able to advise on a wide range of topics, always in his characteristically charming and compelling manner.

Thanks to all of those that made our annual CFO Supper in Knightsbridge a great success. Special thanks to Gavin Hewitt who gave a terrific speech on the referendum and evolving political landscape - I've had excellent feedback.

David Ziebart, Director at the Page Executive CFO Practice for London and Middlesex.

Gavin did a great job. Exactly what we were looking for.

Clients often ask about purchasing books for giveaways and delegate packs. Below you’ll find a selection of products by Gavin Hewitt. Click the images to view on Amazon's website. For bulk orders, please speak with your Booking Agent.

How to book Gavin Hewitt for your event