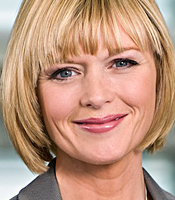 For many years, Julie has been the familiar face on the ITV News at Ten, both as anchor and reporter. She also fronts ITV's 'Tonight' programme, the UK's most watched current affairs show, and has fronted several one-off special events for live television, either independently or in a co-presenting role.

These roles have included the wedding of Prince William and Kate Middleton, Queen’s Diamond Jubilee and reporting live from Rome on the election of Pope Francis. Julie has also been involved in political broadcasting. In 2015 she became the first woman to chair a General Election debate with all seven party political leaders. She was also the first woman to co-present a general election in 2005, while she was still at Sky News. Julie also chaired key debates during the EU referendum – including the live programme with David Cameron and Nigel Farage.

Julie is no stranger to high profile interviews and, as well as interviewing the past five Prime Ministers, she has also interviewed major figures such as Hillary Clinton, Condoleeza Rice, Aung San Suu Kyi, Christine Lagarde, Prince William and Prince Harry. She was also the first British journalist to interview Pope Francis, in a scoop at the Vatican in 2014.

Her reporting has always been at the heart of major news stories as they happened including reporting from Thailand in the aftermath of the Boxing Day Tsunami, on air as the news of the 7/7 attacks unfolded, and travelling to the Falkland Islands to make a series of films on the 25th anniversary of the conflict. She recently anchored live rolling coverage of the Westminster Terror Attack and a special hour long edition of News at Ten the same evening.

Before working for ITV, Julie worked for as a news presenter for Sky News and prior to this, Julie began as a trainee at the BBC, where she started as a reporter and presenter for Midlands Today before moving to London and embarking on a role in National television; reporting and presenting for Breakfast News, Newsround and the Holiday programme.

Julie’s work was recognised when she became the first woman to be voted the ‘Presenter of the Year’ at the Royal Television Society journalism awards in February 2010; an award which she then won again in 2016 – the same year she was also named Broadcast Journalist of the Year by the London Press Club.

Julie read English at Newnham College, Cambridge. She is married with two sons.

How to book Julie Etchingham for your event