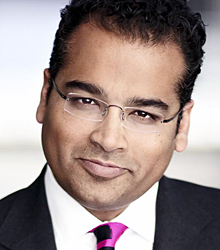 His work has included hosting special coverage of the 9-11 attacks, the Afghan war and the Asian Tsunami with a stint at the Washington bureau covering American politics. Away from the news Krishnan presented The Autopsy, with Professor Gunther Von Hagens, the first public post-mortem broadcast live and also Channel 4's Going Cold Turkey.

Krishnan joined Channel 4 in 1998 after 10 years at the BBC where he presented a variety of programmes from Newsnight to Newsround.

Krishnan has a Degree in philosophy, politics and economics from Oxford University.

How to book Krishnan Guru-Murthy for your event