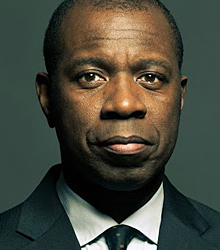 Clive Myrie is a multi-award-winning journalist, one of the BBC's most experienced foreign correspondents and a recognised face as a BBC News presenter. In 2022, he also took over the helm as presenter of Mastermind.

Born in Bolton, Lancashire Clive studied law at the University of Sussex. He gained a place on the BBC's prestigious journalism trainee scheme in 1988, starting in local radio and progressing through the ranks from regional television to network TV and radio reporting in 1992.

As well as regularly presenting on the BBC News Channel and the 1pm and 10pm news bulletins on BBC1, Clive continues to make features and programmes for Panorama, Newsnight and Radio 4.

He has reported from more than 80 countries on some of the most important news events over the last 20 years including the wars in Croatia, Kosovo, Afghanistan and Iraq. In 2002, during the Iraq War he was “embedded” with Royal Marines from 40 Commando part of British Armed forces. In 1996, he covered the rise of the Taliban and their conquest of Afghanistan and after the September 11 attacks, covered their downfall.

Clive has a particular interest in US politics covering the administrations of three Presidents (Clinton, Bush and Obama,) and reported on numerous Congressional mid term elections and two Presidential races. In 2010, he anchored the BBC’s coverage of the midterm congressional polls. Clive has also presented a number of documentaries including a BBC special on the life of President Obama.

He has won awards in Monte Carlo, citations in the United States (from the EMMY committee) and the UK (a Screen Nations award). He has also been twice nominated for France's prestigious Bayeaux War Correspondent award and was part of the BBC team nominated for a BAFTA for coverage of the devastating floods in Mozambique in 2000.

In 2019, Clive Myrie received an honorary doctorate from his alma mater, the University of Sussex, for his journalistic achievements and building a career which has been an inspiration to many young people from diverse backgrounds.

Away from his ‘day job’ Clive indulges in other interests in the arts, film and music, especially jazz.

Please would you convey a huge vote of thanks to Clive Myrie for us. He gave a terrific presentation, full of passion and humour, and the feedback has been wonderful. We are very grateful.

I just wanted to thank you for your time yesterday and the superb after dinner speech you gave. The feedback I have had from those present has, without exception, been very positive and in particular they were wowed by you! The mix of humorous anecdotes and more serious reflections on the current geopolitical (and British political) landscape was perfect, even managing the sensitivity of the fact that there was a Conservative MP present who took the jokes in good humour. You were also very generous with your time, given the fact that dinner rather overran, for which we were also very grateful.

Please do convey our huge thanks to Clive Myrie. The feedback has again been off-the-scale terrific – an excellent, funny host and we were thrilled that he was able to fit it in! [Repeat booking]

How to book Clive Myrie for your event