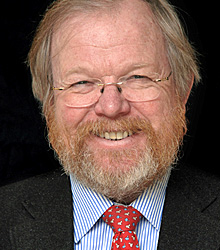 Bill Bryson is the UK's biggest selling non-fiction author since official records began. He was born in Des Moines, Iowa, in 1951. He moved to and settled in England in 1977, mainly working as a journalist, Bill became chief copy editor of the business section of The Times and then deputy national news editor of the business section of The Independent. He left journalism in 1987 to concentrate on writing independently as a full time author.

Bill lived with his English wife and their four young children in North Yorkshire, before moving the family to Hanover, New Hampshire in 1995. They returned from America to live in the UK in 2003 and settled in Norfolk. Also in 2003, he was appointed a Commissioner for English Heritage.

In The Lost Continent, Bill Bryson's hilarious first travel book, he chronicled a trip in his mother's Chevy around small town America. It was followed by Neither Here Nor There, an account of his first trip around Europe.

Other travel books include the massive bestseller Notes From a Small Island, which won the 2003 World Book Day National Poll to find the book which best represented modern England, followed by A Walk in the Woods (in which Stephen Katz, his travel companion from Neither Here Nor There, made a welcome reappearance), Notes From a Big Country, about the USA, and his exploits in and observations on Australia, Down Under, which went on to become the most-borrowed travel book of the Noughties.

Bill Bryson's books on the English language, including Mother Tongue and Made in America garnered wide critical and popular acclaim.

Then he turned his attention to science. A Short History of Nearly Everything was lauded with critical acclaim, it was the biggest selling non-fiction book of its decade in the UK and became a huge international bestseller, winning the Aventis Prize for Science Books as well as the Descartes Science Communication Prize. It was reissued in a lavishly illustrated edition, followed by an illustrated version for younger readers: A Really Short History of Nearly Everything.

In 2006, his memoir of growing up in 1950s America, The Life and Times of the Thunderbolt Kid, was released and became an instant hit. Bill's next subject was the life of William Shakespeare, chronicled to great effect in Shakespeare: The World as a Stage. A revised and updated edition of his Dictionary for Writers and Editors was recently published by Black Swan.

In 2019, Bill turned his attention to the human form when he wrote The Body: A Guide for Occupants. An extraordinary exploration of the human body, it’s a cacophony of quirky wonders and every page dense with scientific facts and extraordinary stories about the heart, lungs, genitals... Written as vividly as a thriller, it also provides jargon-free answers to conundrums such as why we don’t fall out of bed when we are asleep; all delivered in Bill Bryson’s inimitable style.

Bill Bryson was the Chancellor of Durham University from 2005-2011, and, in 2006, was awarded an honorary OBE for services to literature. His love of the English countryside is well known and he became the President of the Campaign to Protect Rural England in 2007. In 2020 he announced retirement from writing to spend time with his many grandchildren.

After Dinner Speaking
With a wacky world view that garners him comparisons to everyone from Chaucer to Dave Barry, Bill Bryson is a formidable after dinner speaker that entertains audiences around the world with his travelogues and insights into the intricacies of language.

Clients often ask about purchasing books for giveaways and delegate packs. Below you’ll find a selection of products by Bill Bryson OBE. Click the images to view on Amazon's website. For bulk orders, please speak with your Booking Agent.

How to book Bill Bryson OBE for your event