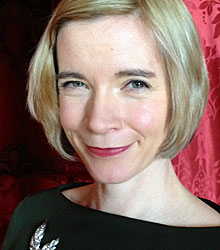 Dr Lucy Worsley is passionate about making history engaging to the widest possible audience. By day, she is Chief Curator at Historic Royal Palaces, the independent charity that welcomes more than three million visitors annually to the unoccupied royal palaces of London, including the Tower of London, Kensington Palace State Apartments and Hampton Court Palace. Somewhere in between she also finds the time to present TV series on a range of historical subjects.

Lucy graduated from New College, Oxford with a first-class honours BA degree in Ancient and Modern History, and in 2001 she was awarded a PHD from the University of Sussex.

Her first paid employment after studying history at Oxford was at a minor stately home called Milton Manor, near Abingdon, where she fed the llamas. After that she became an Inspector of Ancient Monuments at English Heritage, doing historical research at Bolsover Castle in Derbyshire: this led to her first book, 'Cavalier', about a dissolute Royalist duke.

Her work as a curator at Kensington Palace led to her book 'Courtiers', which was followed by 'If Walls Could Talk', 'A Very British Murder', and her first historical novel for young readers, 'Eliza Rose', which is set at the Tudor court. Then it was Jane Austen, for her 200th anniversary, then Queen Victoria, for hers.

Lucy’s writing has been very well received and her history books include Courtiers: A Secret History of the Georgian Court (2010),If Walls Could Talk: An Intimate History of Your Home (2010), A Very British Murder (2013) and Jane Austen at Home (2017). In 2016 Lucy published her first novel for children Eliza Rose which she followed up with My Name is Victoria in 2017.

She lives by the Thames in South London with her husband Mark Hines. She was awarded an OBE in 2018 for her services to history and heritage.

Dr Lucy Worsley presents a selection of highly entertaining and informative talks that will be of equal interest to the avid history buff as much as everyday folk. Her most popular speeches are below:

Jane Austen at Home
In a humorous illustrated talk, Dr Lucy Worsley brings her favourite author back to life through the houses, places and possessions that mattered to her.

A Very British Murder
An illustrated tour through the dark story of our fascination with murder, with renowned historian Lucy Worsley. Lucy has covered the history of this very British obsession in a book and BBC TV series. Here she shares its secrets and explores the history of this phenomenon in forensic detail, examining not only the crimes themselves but also how murder became a form of middle-class entertainment through novels, plays, artefacts and the press. From a Regency serial killer to Agatha Christie, this is the story of how crime was turned into art.

Clever Queen Caroline: An Intimate Story from the Georgian Age
Lucy Worsley takes you on a journey through the weird world of the Georgian court by telling the story of her favourite queen, Caroline. The talk ties in with Lucy’s BBC Four series, The First Georgians, and her book Courtiers, The Secret History of the Georgian Court.

If Walls Could Talk: An Intimate History of Your Home
Following the four part BBC series and hit-selling book, If Walls Could Talk, Lucy takes audiences on trip through the home discovering the hygiene and homely habits of the British over the past 800 years.

Thank you to Lucy for making the day as successful as it was. Our members loved her and I don’t think any other speaker has received a standing ovation as she did.”

Please can you thank Lucy for doing such a great job! She made 23 interviews seem effortless. Royal Mail have been so pleased with the campaign. They absolutely love Lucy and were delighted with her involvement.

Lucy Worsley is an articulate and skilled communicator who presents with supreme personal confidence, charisma and style. Her passion for her subject and her ability to engage with an audience combines to create a truly memorable and enjoyable evening.

Clients often ask about purchasing books for giveaways and delegate packs. Below you’ll find a selection of products by Lucy Worsley. Click the images to view on Amazon's website. For bulk orders, please speak with your Booking Agent.

How to book Lucy Worsley for your event