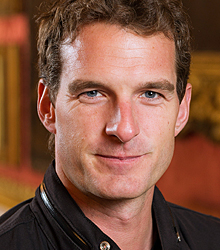 Copyright © BBC - The One Show
Sections:

Dan Snow is a historian, broadcaster and television presenter. He was born and raised in London, and remembers spending every weekend of his childhood being taken to castles, battlefields, country houses and churches.

Dan developed a great love of history which he went on to pursue at Oxford University. While there he also rowed in the Boat Race three times. He left with a double first in history and started presenting military history programmes with his father, Peter Snow. Their series, Battlefield Britain, won a BAFTA award. It told the story of 8 of the decisive clashes in British history from Boudicca to the Battle of Britain. The follow up series was transmitted in the summer of 2007. It featured 8 of the key military encounters of the 20th century including battles such as Stalingrad and the Tet Offensive in Vietnam.

Dan Snow has a regular slot on the One Show on BBC1 where he explores great stories from British history. He made a documentary on China's First Emperor and his Terracotta Army for BBC2 in 2007 and the follow up on the Emperor Hadrian was on BBC2 the following year. In June 2008 Dan also explored the islands of St Kilda for Britain's Lost World on BBC1.

His series Empire of the Seas: How the Royal Navy Made the Modern World was broadcast in early 2010. During the course of his work he has flown World War Two aircraft, been gassed, shovelled muck in a sewer under London for a day, contracted hypothermia and been trained as a sniper.

Dan's first solo book 'Death or Victory' was published in September 2009. It is an account of the fall of Quebec in 1759. An accompanying television programme was broadcast by BBC2 in March 2010, produced by Dan's own production company.

Clients often ask about purchasing books for giveaways and delegate packs. Below you’ll find a selection of products by Dan Snow MBE. Click the images to view on Amazon's website. For bulk orders, please speak with your Booking Agent.

How to book Dan Snow MBE for your event

One of Britain's best known journalists, presenters and broadcasters

One of Britain's best known journalists, presenters and broadcasters