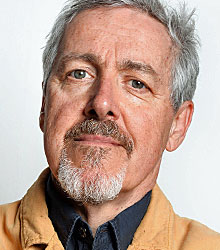 Griff Rhys Jones is probably best known for his comedy sketch work on the BBC, most notably NOT THE NINE O'CLOCK NEWS and SMITH AND JONES.

He is a prolific actor and writer, with his recent memoir SEMI-DETATCHED published by Penguin. Recent acting work includes MINE ALL MINE and MARPLE for ITV1. He has hosted three series of the BBC2 show RESTORATION and has authored recent documentaries on John Betjeman, Arthur Ransome, Rudyard Kipling, Charles Dickens and Thomas Hardy.

He also presented a range of series looking at everything from Mountains, Cities and Rivers. He recently had a massively successful run in the West End revival of OLIVER! His latest show, a fascinating look at Tribal Art from across the globe went out on BBC2 and he is currently working on a major new series for BBC1.

He was the driving force behind the restoration of Hackney Empire theatre in London, and has undertaken several projects of his own, notably the restoration of a Pembrokeshire farm, which was filmed for the BBC and was inspired by his own interest in architecture and conservation.

Griff holds honorary degrees from University of East Anglia, APU and University of Glamorgan and is a Fellow of Welsh College of Music and Drama, Emmanuel College, Cambridge and the Royal Society of Arts.

He gives a lot of time to charitable causes, from Comic Relief to the Lucie Blackman Trust, and in 2004 led the demonstration at Senate House, Cambridge to prevent the closure of the Architecture degree course at Cambridge.

In 2007 he became Vice-President of the River Stour Trust, and in 2008 President of the Civic Trust. An enthusiastic sailor, he owns the classic yacht Undina, which took the starring role in Three Men in Another Boat in 2007.

In 2019 Griff was awarded an OBE for services to the National Civic Society Movement, charity and entertainment in the Queen’s Birthday Honours list.

Clients often ask about purchasing books for giveaways and delegate packs. Below you’ll find a selection of products by Griff Rhys Jones OBE. Click the images to view on Amazon's website. For bulk orders, please speak with your Booking Agent.

How to book Griff Rhys Jones OBE for your event