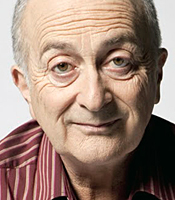 Over the last few decades Sir Tony Robinson has emerged as Britain's foremost face of popular history, the creator of a worldwide comedy icon, and an award winning writer of children's books and television.

His stage career started at 13 when, playing a member of Fagin's gang in a West End production of Oliver!, he was catapulted into the role of The Artful Dodger when the boy playing him, as Robinson remembers, 'bunked off'. Later, after training at the Central School of Speech and Drama he spent several years in fringe theatre and rep, worked as a theatre director and appeared with the Chichester Festival Theatre, the RSC and the National Theatre.

Then, in 1983, everything changed. Richard Curtis (Four Weddings and a Funeral, Love Actually, Notting Hill), approached the then almost unknown actor to take on the role for which he will always be known, that of Edmund Blackadder's sidekick, Baldrick. Tony also presented twenty series of Channel 4's archaeology series Time Team - which has excavated everything from Hadrian's Wall to a crashed Spitfire. - and wrote and starred in Maid Marian and Her Merry Men.

He's also made numerous factual series, including The Worst Jobs In History, Tony Robinson Down Under and Tony Robinson's Time Walks together with a host of documentaries exploring, for example, the UK's legal system, Macbeth, Robin Hood and Christian Fundamentalism.

It was Richard Curtis who encouraged Tony Robinson to write, made him feel comfortable with his predominantly Oxbridge counterparts and involved him in Comic Relief. Oxfam's Claire Lewis praises the actor's involvement, especially in the On The Line project which links people in Europe and Africa. For his part, Tony says that the most moving moment of his life was when he saw a dying child revived thanks to a rehydration pack which cost 20 pence.

He's also a champion of improved care for the elderly and, as such, was invited to give the Dimbleby Lecture about assisted dying on behalf of Terry Pratchett, making the acclaimed documentary, Me and My Mum and taking part in the BBC's campaigning series , When I'm Sixty Five.

Tony Robinson has been a long-standing commitment to the Labour Party and the actors' union, Equity. His four years as vice-chairman were politically rough. Open warfare broke out between those, including Tony Blair's father-in-law Tony Booth, who wanted Equity to remain non-political, and New Labour activists like Tony Robinson and former EastEnders star Michael Cashman MEP who, their opponents claim, are seeking to affiliate the union to the party.

As a multi award-winning children's television writer his work includes Fat Tulip's Garden, Odysseus – the Greatest Hero of Them All and Blood and Honey. He's also written many children's books including the history series Tony Robinson's Weird World of Wonders. He has also written several books for adults.

Tony was awarded a Knighthood in 2013.

Could you please pass on our thanks to Sir Tony. He was engaging, entertaining and passionate with a style that was personal rather than rehearsed. He did an incredible job personally connecting with many of the attendees by circulating over dinner. Everyone that met him felt he was just a thoroughly nice and genuine guy. He made the evening truly memorable and it will be talked about for a long time to come.

Clients often ask about purchasing books for giveaways and delegate packs. Below you’ll find a selection of products by Sir Tony Robinson. Click the images to view on Amazon's website. For bulk orders, please speak with your Booking Agent.

How to book Sir Tony Robinson for your event