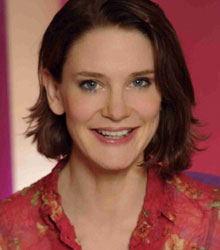 Lexicographer and etymologist, Susie Dent, has crafted an entire career from her unswerving passion for words and her belief in the power, influence and effectiveness that rich and precise communication can bring.

She has been a mainstay of Countdown’s dictionary corner since 1992, with her famous etymological trivia and impeccable command of the English language. She is the longest-serving member of the show's current on-screen team, having first appeared in 1992, she has clocked up more than 4,500 appearances.

A writer and broadcaster on language, in 2022 Susie celebrates 30 years as the resident word expert on Channel 4's Countdown, and also appears on the show's Jimmy Carr-hosted comedy sister, 8 Out of 10 Cats Does Countdown. She has been Honorary Vice President of the Chartered Institute of Editing and Proof Reading (CIEP) since 2016.

Susie Dent was educated at the Marist Convent in Ascot, an independent Roman Catholic day school, with a term at Eton College to study for Oxbridge entrance exams. She went on to Somerville College, Oxford for her BA in modern languages, then to Princeton University to gain a Masters in German.

A former Editorial Director for Oxford University Press, where she had just started working producing English dictionaries — having previously worked on bilingual dictionaries — when she was approached to appear on Countdown, Susie is an unequivocal expert in her field.

She comments regularly on TV and radio on words in the news. She has contributed to discussions on Radio 4's Woman's Hour,15x15, Word of Mouth, Saturday Live, More or Less, Today, and on Radio 5 Live's Breakfast and Drive programmes, and has been a regular panellist on R4's Wordaholics.

She has made guest appearances on many TV programmes including BBC Breakfast,Newsnight, This Morning, Test the Nation, Ant & Dec’s Saturday Night Takeaway, Not Going Out (in a swimsuit), and The One Show.

Susie answers notes and queries about words and phrases in weekly columns in the Radio Times and The Week Junior. She has written for the Independent on Sunday, the Telegraph, and the Times, and is the author of several books, including her latest, Dent’s Modern Tribes.

Previous corporate clients include AXA, The Gateway Alliance, Google, Adobe, King (makers of Candy Crush Saga) and MAG Interactive, all who have benefited from Susie’s unique take on the words we choose.

Susie Dent has a superb ability to pinpoint the power of precise language and the value of its use across business and personal contexts, enabling leaders to communicate effortlessly and memorably.

She weaves entertaining yet educational stories and case studies into her presentations, drawn from a lifetime's observation of how language has both helped and hindered.

Keynote Speeches
Regularly sought-after to deliver keynote speeches on language and communication, at both small company and major corporation events, Susie’s sessions are fun, interactive, and bring her message to life for her audiences.

She enables organisations and management teams to refine their own messages and find their ‘tone of voice’, effectively improving the way they communicate both internally and with customers.

Businesses all over the world face daily challenges when it comes to language, including different demographic nuances and cultural differences in vocabulary.

Susie Dent gives her audiences a new appreciation as to the value that precise language brings, suggesting ways in which they can integrate her approaches into more powerful word choices across different relationships.

Because words are key to persuasion, and for success in marketing or business, Susie reminds us of these three essential ingredients:
• Ethos (passion)
• Logos (words)
• Pathos (the art of connecting to peoples' emotions)

Susie's warm and delightful approach to what could otherwise be an insipid subject, comes from a wealth of experience in both broadcast and print media.

She delivers keynote speeches at seminars and conferences, gives interviews and expert commentary and by-line articles on a number of different communications and marketing topics, including:

• Language of leaders: How to choose the right words to inspire your team
• Motivating millennials: How to use language to connect with a generation
• What's your tribe? What the words you use say about you
• Why industry jargon can be a good thing
• How brands can excel by breaking the rules
• You're fired! The words that will fast-track your exit

Susie’s presentation for the Adobe Summit Marketing Innovations Track was a real hit. The audience not only gained a new appreciation of the value that precise language can bring but also enjoyed the style in which this content was delivered. Susie is both an engaging and informative speaker and was a real pleasure to work with in the build up to the event and onsite. She tailored her presentation to the international audience and received very high scores from the delegates. Highly recommended!

I absolutely loved Susie's keynote talk; it was one of the most memorable and I was really impressed. In today's world of mostly visual communication around us, we tend to forget that the words we choose have impact as well.

We were delighted that Susie agreed to speak at our recent primary school English subject leaders conference. Susie provided a fascinating keynote which delegates found engaging and thought-provoking. Susie’s passion for words and language really inspired colleagues and helped to re-ignite our fascination with the English language. Susie was an engaging speaker with a down-to-earth presentation style which captivated the audience. With the added bonus of a countdown conundrum or two, Susie’s input really was a superb start to our event. Thank you!

Susie Dent gave an engaging and fascinating presentation about the evolution of language to around 250 primary headteachers at this year’s annual conference, held online. She really brought the subject to life – particularly about the horrors of English language spelling - and was both engaging and funny. As one of our delegates said:  “I could have listened to Susie all day and it was a lovely way to end the conference.”

Clients often ask about purchasing books for giveaways and delegate packs. Below you’ll find a selection of products by Susie Dent. Click the images to view on Amazon's website. For bulk orders, please speak with your Booking Agent.

How to book Susie Dent for your event