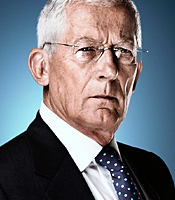 Nick Hewer has hosted Channel 4's popular show Countdown since 2012 and was formerly Lord Alan Sugar's right-hand man on The Apprentice from 2005-2014. His facial expressions, borne of wonderfully dry humour and a lifetime's business experience, tell you exactly what he thinks of the hopeful entrepreneur contestants.

Aged 20, the young Hewer relocated to London from Swindon and joined a PR firm as a trainee, where he worked his way up the ladder to becoming a board member just six years later. He then bought out the owner and became sole shareholder.

The firm was selected by Lord Alan Sugar to represent Amstrad in the eighties and soon became responsible for media handling of all Lord Sugar's business and charitable activities. For 21 years, Nick Hewer played an integral part within Amstrad's management structure. He also built up a long and impressive client list, including the Secretariat of HH the Aga Khan and the wife of the ruler of Dubai, the late Sheikh Maktoum.

After selling the business in 1998, Hewer retired early to his house in south west France; but having become firm friends with Alan Sugar, he was called back to help negotiate with the producers of The Apprentice. The tables were turned when Alan Sugar persuaded Nick to take an on screen role and promised to negotiate his fees. "I fought hard against it", he says, "but he cajoled me - in a muscular sort of way”. Nick Hewer and his original opposite number Margaret Mountford became surprising stars of the hit reality show.

Hewer's status as a businessman and media personality has benefited him in various ways. In 2012, he was one of several celebrities to help promote the change in the UK pension scheme to automatic enrolment. 2013 saw him aligned with Vista Print on their "Build Your Small Business" marketing campaign, and in 2014 he worked with Bark.com to promote its services marketplace product. The latter of which was facilitated and negotiated by NMP Live.

Nick's career has taken him all over the world; in his retirement he still pursues his lifelong passion of world travel, and once drove a 20 year-old Renault 4L solo from London to Mongolia for charity and then took part in the Children in Need trek from Istanbul to Almaty in Kazakhstan.

As a patron of Hope and Homes for Children, Nick Hewer helps promote this British charity. He has worked for them in Romania, Rwanda and will visit Sierra Leone this summer. He has a home in France where he indulges his other passion, for old tractors.

After Dinner Speaking
As an after dinner speaker, Nick Hewer takes his audiences behind the scenes on a lifetime in public relations and as the righthand man to Lord Alan Sugar, both in business and on television for over three decades, before turning into an extended question and answer session.

Awards Hosting
A consummate awards host, Nick brings his sardonic style along with a whistle-stop look at his varied and often surprising career in business and broadcasting.

Nick Hewer was exceptionally brilliant. He delivered a good performance, was interesting to listen to and entertained our guests the way we expected.

Clients often ask about purchasing books for giveaways and delegate packs. Below you’ll find a selection of products by Nick Hewer. Click the images to view on Amazon's website. For bulk orders, please speak with your Booking Agent.

How to book Nick Hewer for your event