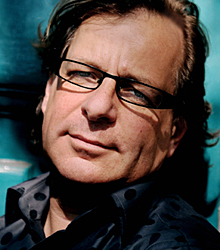 Mark Borkowski is no academic observer of the media and its celebrity machinations: he's in it, up to his neck, every day. This is the man who has handled PR for some of the biggest names in the business and continues to do so.

Mark Borkowski views PR as an instinctive, spontaneous, totally creative business whose sole function is to fire the imagination of the reading and viewing public.

The widely held belief that PR should be about the absolute, rigid, undeviating control of a message is anathema to him. The message, he believes, can only be properly communicated by stirring the imagination, and ultimately what stirs the imagination more than anything else is the ability to conceive and tell a great story.

In academic and industry circles Mark Borkowski is a respected lecturer and thinker. Although his profile is connected with celebrity, much of his agency's day-to-day work comes from the representation of major brands.

In this guise, his company manages - or has managed - PR for the likes of Vodafone, Tiscali, P&O, Eurostar, Lotus, Hovis, Virgin Megastores, Selfridges, Horlicks, Bacardi, Pimm's, Gordon's Gin and Hasbro UK. Not headline-grabbing stuff, yet the techniques Mark views as essential to entertainment PR are the identical techniques he strives to use when generating media coverage for corporate clients.

What distinguishes Mark from other publicists and what forms an intrinsic part of his appeal to corporate clients, is the showmanship of much of his work. His engaging speaking style and witty approach, as well as his depth and breadth of knowledge about PR, have brought him to lecture, speak and run workshops for groups as diverse as Aviva, British Gas, NHS , House of Fraser, Cirque du Soliel, the Cornish Development Agency, LSE, the Design Council, Nissan, Lovell's, CBI and the Institute of Management.

He has also presented a well-received show on the history of publicity stunt at the Edinburgh Fringe, spoken at the Cheltenham Festival of Literature and taken part in a debate at the Cambridge Union.

From keynote presentations and thought leadership to after-dinner speeches, Mark Borkowski is a much sought-after public speaker. Drawing on 35+ years of experience in the business, as a solo theatre publicist and the man behind the Borkowski brand publicity agency, he brings a fresh perspective to the art of publicity, one that - uniquely - draws on the history of the art as much as it does on what is happening in the present day.

Mark delivered an inspirational speech to our business audience which resonated with them for weeks afterwards.

Mark Borkowski was fantastic - everyone has said they feel really motivated and inspired - it has put everyone on a real high. Please thank Mark for me - what a great story teller!

If I hear the words 'inspirational' and 'motivating' one more time, I'm going to pack it up at ITV and come back to work for you (at which you'd have to gently explain I'm ten years too old and far too boring). You were absolutely brilliant at our away day and it was lovely to see you.

When we decided that PR needed to be presented to our delegates there was only one person who would do. That belief in Mark Borkowski has been justified. His breadth of experience, passion for bringing the subject alive and grasp of what great communications can deliver invigorates the course.

Clients often ask about purchasing books for giveaways and delegate packs. Below you’ll find a selection of products by Mark Borkowski. Click the images to view on Amazon's website. For bulk orders, please speak with your Booking Agent.

How to book Mark Borkowski for your event