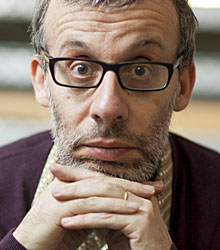 Best known in the UK as a television actor and comedy writer for some of the most iconic programmes of recent years, David Schneider first came to prominence in award-winning programmes such as I'm Alan Partridge, Knowing Me Knowing You, and The Day Today.

He has since appeared in numerous TV shows and films as varied as Mission Impossible and Horrid Henry plus ITV dramas Whitechapel and Hotel Babylon. David has written for TV, radio, films and the stage, and is a regular pundit on shows such as The Agenda and The Review Show. He is also a frequent pundit on TV and radio.

He was educated at the City of London School, followed by the University of Oxford, where he studied modern languages, and undertook a DPhil in Yiddish Drama. During his time at university, David performed a physical comedy act that contrasted with the trend towards stand-up comedy in live performance comedy in the 1980s. It was then that he met Armando Iannucci (The Thick of It, The Armando Iannucci Shows), who recruited him for news-radio spoof On The Hour.

An avid Twitterer, with over 400,000 followers, David now advises companies and brands such as HTC and L'Oreal on their digital and social media output through his own creative agency, as well as making viral comedy videos and pictures for Have I Got News For You?, the Huffington Post, Channel 4, the BBC and numerous websites and brands.

David Schneider presents keynote speeches at conferences and industry events along with workshops and masterclasses on how best to use Twitter and other Social Media, and the wide impact it can have on people and businesses.

Clients range from law firms, the Guardian and BBC News to his local plumbers. David's talks and speeches range from out-and-out comedy to specific analyses and tips on how to cut through on social media. In 2013 he gave a TEDx Talk titled 'Is the Internet Making Us More Stupider'?

Comedy Talks
Hilarious and highly original, David Schneider’s talks look at how the internet and social media are changing us - from the dullest tweet ever to the Cookie Monster's social media meltdown and why you should never trust a Pope on Twitter. Ranging in length from 15 minutes to an hour, they are perfect for ending that long conference day on a high or for that tricky time just after lunch where the energy sags.

Marketing / Technical Talks
Still with an abundance of humour and comedy, these talks share David Schneider's expertise in building influence and cutting through on social media, especially Twitter. They include tips and techniques on how to write the perfect tweet, how to stand out from the herd with formats such as reactive listening and TV style scheduling, and predictions about where the medium is going to help inspire creativity and success in the field. Again, the talks range from 15 minutes to an hour.

Workshops
Ranging in length from an hour to a whole day, these inspirational workshops on Twitter for businesses and brands cover all aspects of tweeting including tone of voice, tweeting with impact and personality, formats, how to build a following, Vines and so on.

For longer workshops, David will be joined by some of his team which includes David Levin (professional Tweeter behind accounts like @BBCTheVoiceUK and @The_Dolphin_Pub), Vine expert Jayne Sharp and social media ‘guru’ Vicky Beeching.

We've worked closely with David Schneider for a long time. Not only is David one of the most authentic and entertaining voices on Twitter but he also has a singular ability to communicate this skill to others. He has spoken at a number of our events where he managed to be the top rated speaker. He's also bloody funny.

Disarming, hilarious and insightful - David Schneider held our room-full of fidgety social media addicts spellbound with mirth for a full half hour. No mean feat! We will definitely be inviting him back.

If you are serious about using Twitter for your business, David Schneider offers fantastic advice and techniques to turn the corporate into the personal, the mundane into the witty, and help you get your message to the people you want it to go to.

How to book David Schneider for your event