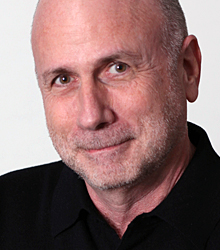 Ken Segall is an advertising executive and the man who put the 'i' in iPad. He worked side-by-side with Steve Jobs for 12 years as Creative Director for Apple's advertising agency and was instrumental in seeing Apple grow from near bankruptcy to become the world's most valuable company.

To Steve Jobs, ‘simplicity' wasn't just a design principle. It was a religion and a weapon. The obsession with simplicity is what separates Apple from other technology companies. It's what helped Apple recover from near-death in 1997 to become the most valuable company on Earth in 2011, and guides the way Apple is organised, how it designs products, and how it connects with customers. It's by crushing the forces of complexity that the company remains on its stellar trajectory.

As Creative Director, Ken Segall played a key role in Apple's resurrection, helping to create such critical ad-campaigns as 'Think Different' which re-launched the brand in the 1990s and he came up with the 'i' - first attached to the iMac - before becoming synonymous with Apple's other key products, most notably and profitably the iPhone and iPad. As an advertising executive by trade, Ken previously worked as a global creative director at Dell, IBM, Intel, and BMW before joining Apple just after Steve Job's second spell in charge of the company.

Keynote business presentations by Ken Segall are as creative and inspired as the speaker himself. Travelling from the USA, Ken is sought-after across the globe for his witty yet clear, succinct and concise speeches where he reveals the key elements of simplicity that have driven Apple's success - which you can, and will, use to improve your own organisation. Ken also recounts his life at Apple, working with Steve Jobs and challenges everyone to think in the most simplistic terms on all aspects of business.

Ken Segall is also a regular media commentator on Apple's business and creativity, and the author of Insanely Simple: The Obsession That Drives Apple's Success.

Ken Segall offers two primary keynote business speeches. The idea is simple: once your organisation understands how simplicity has guided Apple’s success, there’s no limit to how far you can go. Ken delivers this understanding with a mix of Apple insights and interesting stories about working with Steve Jobs.

Simplicity is the most powerful force in business. To most people, it’s obvious why Apple has become a global phenomenon: it makes amazing things amazingly simple. What’s less obvious is the reason why Apple is so good at it.

Thanks to Steve Jobs’ obsession, simplicity is the guideline for everything it does: innovating, organising, selling and communicating. The principles of simplicity can be embraced by anyone, and can be used to achieve extraordinary success.

The Power of Simple
Here, Ken Segall dives into the topic of his best-selling book, Insanely Simple. He talks about Steve Jobs’ passion for simplicity, and how it helped Apple grow from near bankruptcy to become the world’s most valuable company.

Illustrating his points with interesting examples of life in the world of Steve Jobs, Ken shows how Steve’s love of simplicity impacted the way Apple organises, innovates, advertises and communicates. Simplicity is a concept that can help any organisation achieve amazing results.

Inside Apple Advertising
Apple is one of those rare companies whose adverts become as famous as their products. As Steve Jobs’ agency Creative Director during the “Think different” years, Ken Segall can offer an inside look at how some of the more iconic ads came to fruition — from internal debates with Steve Jobs to the production of the ads.

This talk covers key moments in Apple advertising history from an insider’s perspective, and demonstrates that simplicity was always the driver and catalyst for Apple’s success. The ads you saw on TV are only part of the story!

The agency was buzzing... You shared so many principles that could/should be applied to both us and our clients. You inspired and energised.

A motivating talk! I could feel the temperature of the room going up and up. The students were inspired, and their spirits uplifted.

Your profound yet (insanely) simple approach to creativity gave our members a better understanding of the vast difference between good and great.

Clients often ask about purchasing books for giveaways and delegate packs. Below you’ll find a selection of products by Ken Segall. Click the images to view on Amazon's website. For bulk orders, please speak with your Booking Agent.