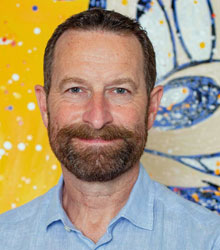 Duncan Wardle was the global Head of Innovation and Creativity at The Walt Disney Corporation from 2011-2017. A 30-year veteran of the company, Disney is widely regarded as one of the world’s most creative and innovative organisations, Duncan now helps other companies to make innovation part of their DNA.

At Disney, Duncan led the team that helped Imagineering, Lucasfilm, Marvel, Pixar and Disney Parks to innovate — creating magical new story lines and experiences for literally millions of consumers around the world.

Duncan spent his career at Disney developing some of their most innovative ideas and strategies; ideas that would forever change the way Disney expands its impact, trains its employees, and solves problems creatively.

In 2008, he was honoured with the “Outstanding American Citizen Award” at the White House and in 2014 was awarded a Hons. Doctorate from Edinburgh Napier University. He also holds the Duke of Edinburgh Award, presented by Her Majesty the Queen. Duncan is a multiple Ted X speaker and contributor to Fast Company Magazine. He teaches Master Classes at Yale, the University of North Carolina, Duke University, and the University of Florida.

However, despite all of the above accolades, and while Duncan loved the challenge of running the creativity and innovation teams at the world’s most creative company, he understood that his ability to successfully teach others to develop an innovation toolkit was something that could have a massive impact for people and organisations across the globe.

So, as a veteran employee, he left Disney to launch a creative consulting company which has quickly become one of the top innovation consulting firms in the world, and in the process, has allowed Duncan to share his creative consultant services and innovation workshops to thousands of employees and executives at companies such as Ford, McKinsey, Coca-Cola, NBA, Apple, Johnson & Johnson and Forbes.

With an infectious energy and playful collaboration, Duncan Wardle pushes executives and their teams to overcome preconceived ideas, act more audaciously, and develop their own innovation “light switch”, which is a method to activate their creative brain and access the ideas that turn ordinary companies into industry leaders.

Ignite a culture of innovation and creativity within your company.

An inspiring and engaging speaker who delivers high-energy, entertaining and impactful keynote presentations, Duncan Wardle will do far more than simply motivate and engage your audience. He will leave them empowered with an immediately actionable set of steps to redefine how they think about problems and solutions, earning your business a massive competitive advantage in the process.

Think Different
Throughout his career at the world’s most innovative organisation, Duncan Wardle learned many important things about building a profitable business and winning creative culture. The most important? If you want to be different, you have to think different.

As one of the world’s most high-impact creativity speakers, Duncan leans on his experiences as the Head of Innovation & Creativity at Disney to take audiences on a journey. They’ll be given a unique set of Innovation Tools and Techniques – the same ones Duncan used with teams inside the Disney organisation.

After this immersive crash course, your organisation’s ability to mine for creativity and innovation will be drastically improved. Your audience will leave with an actionable set of steps they can take to immediately start reshaping your company’s culture, creating a space where innovation thrives, and teams are encouraged and rewarded when they think different.

Embedding Innovation Into Everyone’s DNA
Innovation is not something that happens by chance. It’s the result of building an environment in which it can thrive.

As a creativity and innovation speaker, Duncan Wardle knows a thing or two about fostering an environment of innovation. During his time as the Head of Innovation for a company known for redefining pretty much every industry they touch, Duncan’s decades of success weren’t merely a matter of luck or chance. His results were a direct reflection of his ability to create an innovative culture, and ensure that everyone on his teams were put in a position to let their inner creativity run wild.

Duncan will share the exact steps and strategies used to create such an environment. Your team will learn how to create safe spaces for taking creative risks, ensure everyone on your team is empowered and thinking like an entrepreneur, and transition from the ideation stage into action.

In the end, your team will walk away from this keynote with a fresh outlook on their day to day tasks, and be ready to approach them with new levels of creative thinking, allowing innovation to flourish.

Customer Experience Magic
The best brands in the world don’t thrive simply because of their great product or service. They thrive because of an unrelenting passion and focus on customer experience.

In this keynote presentation, Duncan Wardle will show your audience what can happen when your organisation transitions from a product-centric focus to a customer-centric one, and the steps you’ll need to take to get there.

He’ll share a famous real-world example from his time as the Head of Innovation and Creativity at The Walt Disney Company, where they found themselves facing challenges brought on not by their direct competitors, but by retail behemoth Amazon, whose lightning-fast fulfilment and delivery systems drastically changed how long consumers were willing to wait to be served.

As Duncan walks your audience through this example, he’ll share the exact steps they took to turn this problem into a massive opportunity, and how they used it to reshape the way Disney serves its theme park guests, creating a whole new echelon in customer experience. A new level of experience that’s frequently deemed to be “magic” by their guests.

By the end of this interactive presentation, your audience will have developed a whole new understanding of customer experience, and will be able to reframe all the challenges facing your organisation, finding those unique opportunities to create some customer experience magic.

Duncan has a unique way of connecting with an audience and challenging them to approach creativity in a radically different approach. Considering that many of the people in the audience are creative people by nature and job description, that is fairly remarkable. Duncan’s insights and sense of humour keep the audience engaged from start to finish.

If your company is looking for ways to continuously improve, engage your employees to think differently and have fun along the way, you’ll find inspiration in Duncan’s Innovation Emporium., Not only have our teams returned from Duncan’s workshops with a new-found excitement and a belief that they have what it takes to be innovative, they’ve also generated tangible ideas that are moving into the implementation phase.

In true Disney fashion, Duncan’s teaching methods are educational and entertaining. He has successfully introduced new ways of thinking into our company, paving the way to invigorating and enhancing our culture of continued innovation and creativity.

How to book Duncan Wardle for your event