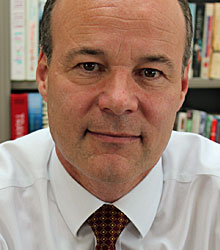 With a CV that The Times described as 'takes some beating' Hamish Taylor has managed to follow academic and sporting success with a fast track career through a number of high profile business roles.

He began his career with Procter & Gamble. From 1984 to 1990 he held a variety of Brand Management positions culminating in responsibility for the household cleaner portfolio (Flash brands). Following this, Hamish was a Management Consultant with PriceWaterhouse specialising in marketing effectiveness studies.

He was appointed Head of Brand Management at British Airways in 1993 taking responsibility for the airline's passenger brands (First, Club, Concorde, etc) and played a role in the growing group of BA franchise partners and Alliances. Innovations there included product re-launches of Club Europe, Club World and First Class.

In 1997, aged 36, he moved to Eurostar as Managing Director of Eurostar (UK) Ltd. After two successful years in this role he was appointed as Chief Executive Officer of Eurostar Group. At the end of 1999 Hamish was appointed Chief Executive Officer of Sainsbury's Bank, a joint venture between J Sainsbury's plc (55%) and the Bank of Scotland (45%). Once again, the objective was rapid growth in profit from the break-even position he inherited.

Since 2004 has also consulted or spoken for a wide variety of organisations including Microsoft, RBS, BAA, Camelot, Inland Revenue, Kimberly Clark, Post Office, Ernst and Young, Diageo and the Economist. Hamish is a Fellow of the Chartered Institute of Bankers, a Fellow of the Chartered Institute of Transport, and was the Rail Professional Business Manager of the year in 1998 for his results at Eurostar.

He has also been dubbed the "master thief" by the Inspired Leaders Network due to his record of stealing ideas from one environment to use in another. Having used yacht designers to put beds into aircraft at British Airways and rugby referees to provide new approaches to risk/regulation management in Financial Services, Hamish Taylor will challenge you and your audience to think further outside the box in your search for breakthroughs.

Whether speaking at or hosting your conference (or running one of his master classes), Hamish Taylor will inspire your team with his rapid fire, enthusiastic stories of innovation in both his own career and the lessons he has learned from other fields as diverse as sport, music, the armed services and teachers! From this come practical lessons and tools we can all use to accelerate innovation, put the customer at the centre of our organisation and/or revolutionise our approach to people/team leadership.

Hamish Taylor will challenge you and your team to think further outside the box in your search for breakthroughs.

Breakthroughs in Customer Focus and Brand Innovation
For many organisations, the challenges they face concern their relationship with their customers. This might be articulated in terms of Customer Service, Brand, Marketing/Sales performance or even team working/leadership. The key challenge in all cases is the same:- "how to put the customer at the core of all we do".

Hamish uses both his practical line management lessons and his experience in applying these lessons to a wide range of industries, to challenge organisations and teams to think differently about the way they understand their customers and re-focus their activity and behaviours accordingly.


Breakthroughs in Innovation and Change
Often a corporation’s challenges revolve a round their desire for greater Innovation and/or the need to drive change more effectively throughout the business. This might be articulated as "innovation", "new ideas", "new thinking", "transformation", or even team working/leadership.

Taking Lessons from outside is critical to innovation and change. Other industries and disciplines often provide the best new ideas - not just in product and service, but also in leadership, process and communications. If you don't look to new sources of inspiration, where will your innovation come from? Hamish Taylor (the "Master Thief") can share examples from BA, Eurostar, Sainsbury's and many others where breakthroughs came from "stealing" ideas from other businesses, sport, the rescue services, the Arts and many other places. He can also suggest places you may wish to look for inspiration - based on your customer promise.

Breakthroughs in Competitive Advantage
In recent years, Hamish Taylor has worked with a large number of Leaders interested in how they can create stronger competitive advantage both externally with customers and in the performance they inspire within their organisations. Hamish has led some major businesses through tough turnaround and high growth situations. He uses this experience and lessons learned from a wide range of industries and disciplines to challenge leaders to think differently about how they approach both competitive advantage and performance and then to re-focus their activity and behaviours accordingly.

Accelerating Growth and Innovation Approach
Hamish Taylor's approach to all growth, innovation and performance topics is based on 4 key principles that act as an "agenda" for both keynote presentations and workshops. These principles can then be adapted to any audience/discipline looking for both inspiration and practical tools that they can take away and use in their own work environment.

To establish the principles, Hamish will use examples from his own experience across a number of industries, and then introduce lessons relevant to the audience from other fields.

One of the best presentations I have ever seen, let alone had the good fortune to chair!

Hamish Taylor's presentation went down extremely well last week. Everyone was very impressed with his enthusiasm, clarity of ideas and the wide range of relevant experience he brought.

Hamish's presentations crackle with energy and original insights that make even our group of top level, seasoned, high-achieving UK business and public sector leaders think 'crikey: that's inspiring!' 'Why didn't I think of that?' and these are people who it's hard to impress.

Hamish Taylor brings an infectious energy to the table. He is enthusiastic yet very keen in hearing what you have to say hence his collaborative approach to creating a piece of work that not only is effective but truly meets the clients need. His enthusiasm is matched with genuine experienced insights into the world of business. The work that Hamish did for the Post Office was received extremely well by the senior management audience and indeed several of whom had a 'corridor' chat with me raving about this guy 'Hamish'. He has real credibility and this shines through in everything he did with us. All in all we would do business again - it was a pleasure!!!

Dynamic and energetic messages; Hamish Taylor challenged our thinking and made us view some of our leadership issues as opportunities.

Hamish Taylor shared some wonderful insights using great real life stories which resonated with the full audience group. Even 2 weeks after the conference, individuals in attendance are still speaking about and referring to his content and applying it to their own daily behaviour and work. We were extremely satisfied with Hamish as a speaker. His energy was outstanding in the delivery of the message as well. Would recommend him without hesitation to other companies.

One of the most practical and relevant workshops I have ever attended.

On behalf of the SC Johnson team I would like to thank you for your presentation yesterday at our Sales event. It was dynamic, inspiring, engaging and thought provoking, and most importantly it was on brief. We value all the real cases you shared to illustrate your point, it was very helpful. We have received very positive feedback from the audience. Our Leaders found you charismatic, energetic and inspiring.

How to book Hamish Taylor for your event