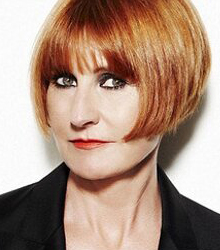 After beginning her retail career as a Saturday girl in John Lewis, Mary later became responsible for windows and display at Harrods and then Topshop. Mary went on to join Harvey Nichols in 1989 and is credited with transforming the brand into the world renowned store and restaurant group it is today.

After leading the transformation, Mary left Harvey Nichols as Creative Director in 1997 and launched her own agency, Yellowdoor, which made its mark in the creative advertising landscape, producing category challenging campaigns and championing brand development for clients including Clarks, Louis Vuitton, Oasis, Swarovski, Dunhill, Boden, Thomas Pink, Patek Philippe and Westfield.

2007 saw the beginning of Mary's television career with the launch of the BBC2 series Mary Queen of Shops. The show took Mary behind the scenes of the fashion retail world, challenging her to rescue a series of failing independent boutiques. A second series aired in 2008 and, following their success, Mary was nominated for two Royal Television Society Awards.

In 2009, Mary Portas responded to the two critical crises facing our world – the financial and the environmental – in her own unique way, with the series Mary Queen of Charity Shops. Mary donned a Save the Children tabard, taking the charity's worst performing store in Orpington, and transforming it into it's best. Mary has since become the Global Retail Ambassador for Save the Children and has pioneered a new type of charity shopping with her ‘Living & Giving' concept – recently opening her third permanent Living & Giving Shop in London's Primrose Hill.

In 2011, Mary Portas moved to Channel 4 with a brand new series Mary Portas: Secret Shopper where she took some of the nation's biggest retailers to task over their lack of customer service culture. The series saw Mary don a wig and costume to go undercover to film for herself the way that customers are routinely treated by the big brands.

In 2011 Mary Portas embarked on her biggest challenge to date – she was commissioned by then Prime Minister David Cameron to lead an independent review into the Future of the High Street. She delivered the report in December 2011, outlining 28 recommendations for rescuing the nation's failing High Streets.

The Government, retailers and the public supported her plan, and Mary’s work has been a catalyst for community regeneration, and the re-visioning of high streets across the country. The Government committed funds in excess of £10million to support the findings of her Review. The TV show Mary Queen of the High Streets followed Mary’s journey in trying to help revive Britain’s failing high streets, by putting local people at the heart of the solution.

In 2013 Mary re-launched her agency as ‘Portas’, reflecting today's retail landscape, and how consumers behave today. She was awarded a Doctorate of Letters in recognition of her contribution to the advancement of marketing and brand communication within the retail sector.

She continues to write weekly for the Telegraph magazine, is invited as keynote speaker for leading world brands and is a judge on the Telegraph’s Best Shops in Britain awards.

Clients often ask about purchasing books for giveaways and delegate packs. Below you’ll find a selection of products by Mary Portas. Click the images to view on Amazon's website. For bulk orders, please speak with your Booking Agent.

How to book Mary Portas for your event