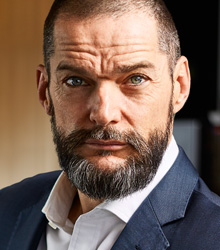 Fred Sirieix is the General Manager at Galvin at Windows, the Michelin-starred restaurant on the 28th floor of the London Hilton on Park Lane. He is also in high demand as a keynote and motivational speaker. However, Fred is perhaps best known for his role as the host and charismatic maître d' in the much-loved First Dates and First Dates Hotel series on Channel 4.

Fred co-hosted with Michel Roux jnr in the BBC2 series about service and hospitality, "Michel Roux's Service". Fred and Galvin at Windows also appeared in The Apprentice on BBC1 in spring 2012.

Fred's TV career has continued to flourish, with him fronting BBC's, Million Pound Menu, which sees restaurant entrepreneurs go head to head to secure a life changing investment for their business. December 2017 saw him joining forces with Gino D'Acampo and Gordon Ramsey on ITV in Gordon, Gino and Fred's Great Christmas Roast. The trio were tasked to deliver a spectacular banquet for deserving members of the public and emergency services such as those who risked their lives in the aftermath of terror attacks, and the Grenfell disaster.

Away from the screen, Fred is a dynamic and highly driven businessman, and a true ambassador for the hospitality industry. 2017 saw the eagerly anticipated release of his book, Secret Service, lifting the lid on the service industry and full of incredible insight from his many years at the forefront of customer service.

Under his leadership Galvin at Windows won the Hotel Restaurant Team of the Year (Hotel Cateys 2007), Best Front of House (Tatler Awards 2007) and Best Hotel Bar (Imbibe Awards 2009). In 2010, Fred was nominated Manager of the year at the Cateys awards. In October 2011, Fred was awarded the "Personality of the year 2011" at the National Restaurant awards for his charity work and relentless promotion of his profession.

In 2012, Fred was voted Educator of the year at the Imbibe awards. More recently Fred launched on Christmas Day 2012 National Waiters Day to celebrate all Front of House staff and inspire people in hospitality careers. At the 30th Cateys Awards Fred was awarded the prestigious Manager of the Year 2013 Cateys. In 2014, at the Imbibe Personality of the year awards 2014, Fred was nominated for Industry Legend of the year.

In March 2014, Fred also received an Honorary MBA from the University of West London. In September 2014 Fred and his team at Galvin at Windows won the Food Service Award at the AA Awards 2014-2015. Starting his career as a Chef de Rang at the 3 stars Michelin restaurant La Tante Claire, Fred then went on to develop his career in various roles in many of London top restaurants including Le Gavroche, Sartoria, Brasserie Roux.

Fred is passionate about training and staff development. His boundless energy has him as the creator and driving force behind the Galvin Cup (cocktail competition) that awards young bar-tending talent and Galvin's Chance, a charity supporting underprivileged youth in front of house in the best hotels, restaurants and bars of London and Scotland. In January 2016, Fred received the British Citizen Award for his charitable work.

He is a keen runner and amateur boxer and his motto is "learn forever, enjoy life and make a difference".

Motivational Speaking, Keynote Speaking and After Dinner Speaking
Fred Sirieix is referred to as the “Service Jedi” by his peers and much of the British press. He has over 25 years of experience and is both an inspiring and very well respected figure in the Hospitality industry.

He co-hosted Michel Roux’s Service on BBC2 and is a regular on British national radio. He is the main man behind several high profile charities and events including National Waiter’s Day. Fred is also the creator and Director of The Art of Service.

He is an experienced coach and trainer and one of the few professionals whose talks resonate both in small private sessions and with large gathering for world wide corporations. Fred Sirieix worked in some of London’s most celebrated restaurants and since May 2006 has held the position of General Manager at the awards winning Michelin star Galvin at Windows. Very few speakers equal Fred’s credibility, passion and breadth of experience in the field of customer service.

Fred Sirieix has delivered talks in many formats, including management team building, team training and coaching, trade events, board briefings, after-dinner speeches, motivational presentations and public seminars. His speeches are unique, informative, entertaining and provocative. He speaks enthusiastically about the contribution of great service to a customer’s experience, a brand’s longevity and reputation as well as its link to business survival and profitability.

For Fred, it is about making excellence a habit in every part of life, teaching people about ownership, the beauty of rigour and discipline and helping delegates take responsibility for living their vision and values to the full. Fred is comfortable talking to any sector and any audiences – customer service principles are the same across industries.

Fred is passionate about his profession and his desire to teach is infectious – What a great tool!

Any business that understands its success comes from offering great service should have Fred Sirieix on speed dial.

Quite simply…Fred Sirieix talks more sense on how to deliver world-class customer service than anyone else I have ever met. The Good Service Charter will make a huge difference to the automotive industry.

Miele have worked with Fred Sirieix on a number of occasions. Simply put, Fred has been inspirational within our business. He has delivered a number of seminars which have made our colleagues and customers radically reassess how we go about providing a premium customer service. He does this by demonstrating how the excellence which is just par for the course in a top restaurant and how it can be delivered in any setting, whether that be a delivery driver or a sales advisor. This is achieved by some brilliantly entertaining storytelling which serves to show how to achieve that 'magic touch’ which makes a customer feel uniquely special. Fred has been the catalyst for Miele raising the bar in the customer service standards we set and achieve

Working with Fred Sirieix was like a dream come true. Not just because we are all general fans of the man himself, but because he is very knowledgeable about the meetings and events industry, very honest in his delivery and completely humble. He helped us shape the content for his session, offered to promote our event on his Twitter feed (which he did immediately) and was an absolute gentleman on the day of the event. If every celebrity booking was like this, I would be tempted to blow more of my event budget on the celebrity speaker alone.

Clients often ask about purchasing books for giveaways and delegate packs. Below you’ll find a selection of products by Fred Sirieix. Click the images to view on Amazon's website. For bulk orders, please speak with your Booking Agent.

How to book Fred Sirieix for your event