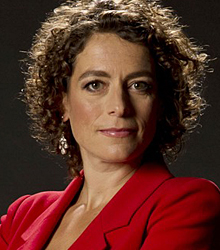 Alex Polizzi is a renown hotelier and presenter of the TV series The Hotel Inspector on Channel 5. She comes from a long line of hoteliers - her mother, the hotel designer Olga Polizzi, is the sister of Sir Rocco Forte, and daughter of Lord Forte.

After reading English at Oxford University, Alex trained at the Mandarin Oriental in Hong Kong, worked for Marco Pierre White at the Criterion, and then worked at various Rocco Forte hotels around the world.

Alex manages the Hotel Endsleigh in Milton Abbot, near Tavistock in Devon which is owned by her mother Olga Polizzi. Before taking over and stamping their mark on the Endsleigh, Alex and Olga Polizzi had already launched the highly praised Hotel Tresanton at St Mawes in Cornwall.

Alex Polizzi then took on another project: becoming the host of highly acclaimed show, The Hotel Inspector in 2008. The show sees Alex visiting struggling British hotels to try to turn their fortunes around by giving advice,suggestions and undertaking renovation projects.

With several series of The Hotel Inspector firmly under her belt, Alex's latest venture The Fixer, aired on BBC2 in January 2012. The show focuses on Alex turning around family businesses, not just hotels. Having mastered television, Alex published her first book, sharing her advice on how to enjoy the very best hotels.

Alongside Alex's television work and business activities she has become a popular keynote business speaker.

Clients often ask about purchasing books for giveaways and delegate packs. Below you’ll find a selection of products by Alex Polizzi. Click the images to view on Amazon's website. For bulk orders, please speak with your Booking Agent.

How to book Alex Polizzi for your event