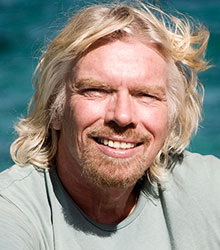 A recent YOUGOV poll revealed that the person British workers would most like as their manager was Sir Richard Branson. Voted the UK's number one Twitter user, the world's most social CEO and the world's most followed person on LinkedIn, Sir Richard maintains a daily blog on virgin.com with more than 21 million followers across five social networks.

Richard Branson was born in 1950 and at age 17 started a student advisory service. Three years later, he founded the Virgin mail order record company and shortly afterwards opened a shop on Oxford Street.

In 1972 a studio was built in Oxfordshire, the very one that Mike Oldfield recorded his five millions selling album 'Tubular Bells'. This was to provide the catalyst for Virgin Records that went on to sign major names such as The Rolling Stones, Culture Club, Janet Jackson, Peter Gabriel, Simple Minds and The Human League. By the early 1980s, Virgin Records was one the worlds top six record companies.

In 1984, Richard Branson got a phone call out of the blue suggesting a jumbo jet passenger service between London and New York. He liked the idea, much to the horror of his fellow directors who thought him crazy. Undeterred, he announced to the world that Virgin Atlantic Airways would begin operating within three months! At which point a lot of other people agreed - he was crazy!

However, an aircraft was found, staff were hired, licences granted and, thanks in no small part to Sir Richard's infectious enthusiasm, on June, 22 1984, an aircraft packed with friends, celebrities and the media set off for Newark, New Jersey - and a phenomenon was born. Since then, Virgin Atlantic has become the second largest long-haul international airline to 21 destinations all over the world.

As you might imagine, Sir Richard Branson never stops (which can be exhausting for the people around him) and sets himself just as steep challenges in his personal life as in his business life. Just for fun, he has been involved in round-the-world balloon attempts as well as rekindling the spirit of the Blue Riband when he crossed the Atlantic in his Virgin Atlantic Challenger II boat in the fastest ever recorded time.

Richard Branson is the author of four best-selling books, Losing My Virginity, Screw It, Let's Do It: Lessons in Life and Business, Business Stripped Bare: Adventures of a Global Entrepreneur and Reach for the Skies: Ballooning, Birdmen and Blasting Into Space. In 1999 he was awarded a knighthood by the HM The Queen for services to entrepreneurship.

These days, whilst ‘semi retired', Richard bases himself on Necker Island from where he oversees his numerous business ventures and where most of his time is now spent working with Virgin Unite and organisations it has incubated, such as The Elders, Carbon War Room, B Team and the Branson Centre of Entrepreneurship. However, he still devotes a considerable amount of time to travel the world sharing what he's learned by giving speeches and trying to help the next generation of entrepreneurs.

100% of any monies Sir Richard Branson earns from these engagements he gives to charity. This amounts to many millions per year, and he has pledged to continue to try to raise as much in the years to come.

Sir Richard Branson is one of the worlds best known entrepreneurs and a much sought-after keynote conference speaker. In his trademark charismatic and honest style, Richard shares the inside track on some of his greatest achievements over forty years in business as well as the lessons he has learned from his setbacks.

In a Q&A interview or “fireside chat” style presentation, he tells the story behind the launches of his Virgin brands, including conquering new frontiers in space with his Virgin Galactic. He also shares his thoughts on the changing face of the global economy and how businesses worldwide need to work together to tackle environmental challenges and invest in the future of our world.

Combining invaluable advice with remarkable and candid inside stories, Sir Richard Branson is a dynamic, inspirational and truly original guide to success in business and in life.

Some of Sir Richard’s popular speech titles include:
• Screw Business as Usual
• Business Stripped Bare: Adventures of a Global Entrepreneur
• Screw It, Let’s Do It: 14 Lessons on Making It to the Top While Having Fun & Staying Green
• Losing My Virginity: How I’ve Survived, Had Fun & Made a Fortune Doing Business My Way

Clients often ask about purchasing books for giveaways and delegate packs. Below you’ll find a selection of products by Sir Richard Branson. Click the images to view on Amazon's website. For bulk orders, please speak with your Booking Agent.

How to book Sir Richard Branson for your event