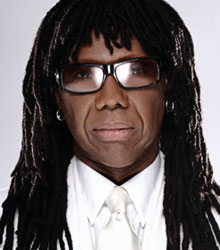 Nile Rodgers is considered one of the most influential producers in the history of popular music, having co-founded 70s band CHIC and produced some of the biggest chart hits performed by Madonna, David Bowie, Duran Duran, Diana Ross and, most recently, Daft Punk.

With his iconic stature as a true hit-maker, Nile has brought the world such classic songs as Dance, Dance, Dance, Everybody Dance, I Want Your Love, Le Freak (Aw Freak Out!), Good Times, He's The Greatest Dancer, We Are Family, I'm Coming Out, Upside Down, Like A Virgin and Let's Dance, among numerous others.

Nile won three Grammy awards for his work with Daft Punk on their global hit album Random Access Memories as well as their hit single, Get Lucky, which broke records for being the first song in history to go #1 on iTunes in 106 markets around the world.

Rodgers is no stranger to complex situations. He was born in New York to his 14-year-old mother, Beverley Goodman, and father Nile Rodgers Sr. who worked for John Glanzrock who would later become his white and Jewish stepfather. Growing up, his life was anything but smooth-sailing, but it was also the making of him.

An incredibly skilled musician, Nile’s own band, CHIC, was catapulted into the pop charts in at the beginning of the 1970s disco movement and changed the face of pop music forever. Unable to keep his talent from the world, Rodgers and CHIC co-founder, Bernard Edwards, established the CHIC Organisation, for the music they produced within CHIC for artists outside of the group.

His work in the CHIC Organisation and his productions for artists like David Bowie, INXS, Debbie Harry, Diana Ross, and Madonna have sold over 500 million albums and 75 million singles worldwide while his innovative, trendsetting collaborations with Daft Punk, Avicii, Sigala, Disclosure, and Sam Smith reflect the vanguard of contemporary music.

With over 200 production credits to his name, including Let’s Dance by David Bowie, Notorious by Duran Duran and Like a Virgin by Madonna, his work has sold over 200 million albums and 50 million singles worldwide.

To complement his work in the music industry, Rodgers has scored soundtracks for a number of Hollywood blockbusters including Coming to America, White Hot, Thelma and Louise, and Beverly Hill Cops III to name a few.

In tandem with Nile's illustrious music career, he is also the Founder and Chairman of the We Are Family Foundation, a not-for-profit organisation dedicated to the vision of a global family through programs that inspire and educate the next generation about respect, understanding and cultural diversity — while amplifying youth efforts to solve some of our biggest global problems.

With the We Are Family Foundation having been born as a result of 9/11, Nile asked the question "Can we organise for peace half as effectively as others do for hate? My song, We Are Family, was the inspiration to bring people together, celebrate our differences and share ideas across borders in order to solve some of the bigger problems facing our world."

Most recently, he was appointed as the first ever Chief Creative Advisor for the legendary Abbey Road Studios and was included in “festival best” performances at both Glastonbury and Coachella that resulted in the BBC nominating the band for the BBC Music Awards as “Best Live Performance” and the LA Times stating “Nile Rodgers influence stretches all over Coachella, beaming the sound of a better future”.

Nile Rodgers is a global force in pioneering innovation, creativity and disruption. With over four decades of worldwide hits to his name, he is considered one of the most important producers in the history of popular music.

Through his inspiring keynote presentations; The evolution of Ideas and The Power of Creative Collaboration, Nile Rodgers explores not only his insanely successful career, but also his fair share of personal obstacles that he has had to overcome, from addiction to cancer.

With a wealth of anecdotes about the artists he’s worked with and the stories behind some of the best-known songs, Nile applies his passion for creativity to the business world. He discusses the importance of persistence and determination as a driving force for creativity. He also examines different structures of collaboration and teamwork, and argues that diversity is a key ingredient to its success.

For fans of his wide-ranging work, he also intersperses the lessons he’s learnt from his impressive career with performances of riffs and hooks from some of the most celebrated songs of all time.

Since his first gig when he was 19-years-old to today, Rodgers has only missed two performances in his entire career; there’s literally nothing that can hold him back.

Clients often ask about purchasing books for giveaways and delegate packs. Below you’ll find a selection of products by Nile Rodgers. Click the images to view on Amazon's website. For bulk orders, please speak with your Booking Agent.

How to book Nile Rodgers for your event