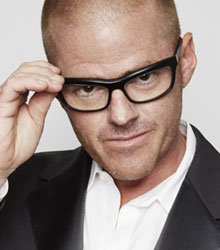 Internationally famous for his award winning, three Michelin-starred restaurant, Heston Blumenthal is considered to be one of the best and most influential chefs of his generation. Entirely self-taught, he has pushed the boundaries of a traditional kitchen and changed the way people cook and think about eating.

Born in London and spending his childhood years in Berkshire, at the age of fifteen Heston travelled to France with his parents for the first time. On this trip he visited L’Oustau de Baumaniere one of France’s greatest restaurants, located in a small village in Provence. There, Heston was exposed to the wonderful world of gastronomy and was immediately consumed by it.

On returning to the UK he tried to gain a position in the kitchens of London’s hotels and restaurants, but at sixteen this proved too daunting a task. Undeterred, he spent the next decade learning the rudiments of French cuisine from books, and worked in various different jobs to fund his trips to France.

On these trips Heston visited restaurants, vineyards, cheese makers, butchers and artisan producers. His research was extensive, thorough and determined, attributes which soon became the trademarks of his success.

In 1995, aged 29, this self-taught chef opened the Fat Duck restaurant, which gained three Michelin stars in January 2004. By early 2005, The Fat Duck had received worldwide recognition for its unique approach to gastronomy and was proclaimed The Best Restaurant in the World by the “50 Best” Academy of over 600 international food critics, journalists and chefs.

In the early days at the Fat Duck, one of the books he read during that time was On Food and Cooking, by Harold McGee. The book McGee wrote questioned the fundamental rules of kitchen traditions. The theories within the book turned the cooking methods and processes that Heston had practised previously completely on its head. Intrigued by this, Heston began a journey exploring further the science of food and the effects of smell and taste on the palate, the senses, the memory and the emotions.

Heston Blumenthal has been described as a culinary alchemist for his innovative style of cuisine. His work has awarded him international recognition and his research into the sensory journey of gastronomy has enabled him to work with food historian, perfumist, food physiologists and biochemists from all over the world.

His papers written in partnership with the University of Reading awarded him an Honorary Doctorate of Science in 2006. His Television Programme ‘Heston Blumenthal – In Search of Perfection’ was awarded a GQ Glenfiddich award in 2007 and was nominated for a BAFTA in 2008, in addition Feast with Channel 4 was also BAFTA-nominated in 2010.

In the New Year’s Honours List of 2006, Heston Blumenthal was awarded an OBE for his contribution to British Gastronomy by Her Majesty the Queen.

2011 saw the launch of Heston’s first restaurant to open outside of Bray. Dinner by Heston Blumenthal, a brasserie style restaurant with a menu inspired by Historic British dishes opened at The Mandarin Oriental, Hyde Park on the 31st January 2011 and was warmly received to great critical acclaim including a Michelin Star in its first year.

Creativity and imagination manifest themselves in many forms and Heston Blumenthal, the self-taught three Michelin Starred chef, has established himself as one of the most creative and original thinkers of a generation.

He has been challenging our perception and expectations of food for over two decades, creating some of the most unique and memorable dishes you could imagine, from his famous snail porridge to crab ice cream.

Creativity is at the heart of Heston Blumenthal’s keynote presentations, where he tells audiences to question everything and retain their childhood imagination.

Questioning everything is, after all, how he created some of his most memorable dishes - asking why people like certain things; what about it makes them like it; is it because they have a fond memory attached to it; how can other senses be brought into the mix to enrich that experience and link it to memories?

He comments that the reason books on creativity don’t generally work is because we are all creative and have creativity within us, what prevents us from releasing our creativity is the straightjacket of fear that many of us wear. and that “the whole reason for science and structured learning is the measured stuff, and we need that for so many reasons. It enables us to communicate and produce things, but it also gives us something to challenge. If only we could unzip ourselves sometimes and realise how strong being vulnerable can be and keep the imagination as human beings.’

Question everything, because the opposite is to question nothing, and that wouldn’t be human.

Clients often ask about purchasing books for giveaways and delegate packs. Below you’ll find a selection of products by Heston Blumenthal OBE. Click the images to view on Amazon's website. For bulk orders, please speak with your Booking Agent.

How to book Heston Blumenthal OBE for your event