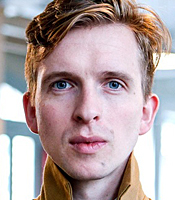 For Bompas & Parr, Sam Bompas is the salesman – charming and charismatic he tantalises with promises of vast chocolate waterfalls, mountains of jelly and clouds of alcohol.

Sam spends a large portion of his time researching and developing new ideas and inexorably studying historical influences to inspire new and exciting projects and challenges for the team. In his library at the Bompas & Parr studio, you can find a book or an article on almost any topic. A talented writer and a true raconteur, Sam is articulate and inventive.

In addition to his role as founding partner at Bompas & Parr, Sam Bompas undertakes a large amount of public speaking, delivering talks on topics as varied as “Food on All Fours” and “My Favorite Chemicals” complete with explosions, nudity and viciously boozy cocktails.

Bompas and Parr first came to prominence through its expertise in jelly making, but has since gone on to create immersive flavour-based experiences ranging from an inhabitable cloud of gin and tonic, the world's first multi-sensory fireworks and a Taste Experience for the Guinness Storehouse in Dublin, officially the best place in the world to taste Guinness.

The studio now consists of a team of creatives, producers, cooks, designers, specialised technicians and architects. With Sam Bompas and Harry Parr the team works to experiment, develop, produce and install projects, artworks, jellies and exhibitions, as well as archiving, communicating, and contextualising the work. Bompas & Parr also collaborates with specialist technicians, engineers, artists, scientists, musicians and many other disciplines to create wondrous events.

Sam Bompas is a hugely entertaining and charismatic speaker who covers a range of topics within the food industry. He can also lead bespoke workshops involving all kinds of crazy Willy Wonka esq. delights.

Clients often ask about purchasing books for giveaways and delegate packs. Below you’ll find a selection of products by Sam Bompas. Click the images to view on Amazon's website. For bulk orders, please speak with your Booking Agent.

How to book Sam Bompas for your event