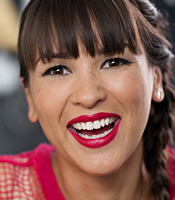 Rachel Khoo's unconventional food background has helped formulate her unique culinary touch. She graduated with a Bachelors degree in Art & Design from the renowned Central Saint Martins College of Art and Design in London. Thereafter she worked for a luxury fashion brand, doing PR and e-marketing. Ultimately, her passion for pâtisserie lured her to Paris, where she studied at Le Cordon Bleu and obtained a pastry degree.

Rachel put her skills to excellent use at the delightful Paris culinary bookstore and tea salon, La Cocotte. There she concocted delicious sweet treats, regularly providing catering for culinary book launches and hosting cookery classes on site. Following the success of her edible endeavours at La Cocotte, Rachel Khoo now works on culinary projects throughout the world. Her role as an international food creative has spanned six-course dinners and workshops in places as far-flung as London, Paris, Berlin, Milan, Melbourne, Sydney and Buenos Aires.

Rachel's first cookery show “The Little Paris Kitchen” was aired on BBC in 2012 for six weeks and has since been shown around the world. The show has aired all over the world, from Australia to Brazil, Canada to Finland, the USA to Hong Kong and many, many more.

Her fifth book “Rachel Khoo's Kitchen Notebook”, featuring all the recipes from the show plus many more was published in 2015 in the UK – it's been published in New Zealand, Australia, Germany and the Netherlands too.

A six-part series ‘A Cook Abroad'wasaired on BBC2 in 2015. Rachel is one of the featured cooks in this fun series, which sees cooks journey to places that inspire them. In her episode, Rachel journeys to Malaysia to explore part of her culinary heritage.

She regularly writes a recipe column for the London Evening Standardand has a column in the Daily Mail's Weekend magazine. Rachel even works on all the illustrations for her books herself!

Clients often ask about purchasing books for giveaways and delegate packs. Below you’ll find a selection of products by Rachel Khoo. Click the images to view on Amazon's website. For bulk orders, please speak with your Booking Agent.

How to book Rachel Khoo for your event