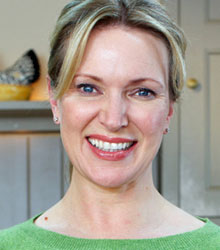 Rachel Allen was brought up in Dublin and left home at 18 to study at the world famous Ballymaloe Cookery School where she still teaches, as well as being a busy TV chef, author, journalist and mother.

Rachel’s style of cooking is above all practical - simple but delicious food, ideal for family and friends. Her influences are both regional and global. The BBC described her as an "Irish cooking queen" and Good Food Magazine believe she "has put Irish cooking on the map in recent years”.

She has a devoted fan base in the UK and Ireland, and the popularity of her television programmes continues to rise internationally. Her charming manner and effortless style make her a delight to watch. Rachel’s extremely popular television series’ have been broadcast in 27 different countries on 33 channels. Her 10th series, Rachel’s Everyday Kitchen was shown on RTE and UKTV’s Good Food Channel in September 2013, and her latest series Coastal Cookery will air on RTE & UKTV Good Food in autumn 2015.

As well as attracting viewers of two million on the BBC, Rachel’s series is also the highest ever rated show on Good Food Channel. In 2010 Rachel was also a main presenter of Good Food Channel’s flagship programme Market Kitchen. Her first show to be broadcast in the U.S. was Rachel’s Favourite Food for Friends in March 2010 on the PBS Network. Her show has been picked up by 24 of the top 25 PBS Channels and 88 of the top 100 channels across America, achieving 40,000 broadcasts in the year. Her more recent programme catalogue is airing on The Cooking Channel, and Easy Meals aired on TLC India in March 2014.

Her hugely successful licensing deals have included table ware, candles and textiles with Tipperary Crystal, and small electrical appliances, oven and bake ware with Ultimate Products. In 2013 Rachel launched her own range of cakes and dessert flavoured confectionery.

Rachel is the author of over 10 best selling cookery books, and on the way to selling two million copies worldwide, with the latest title Coast: Recipes from Ireland’s Wild Atlantic Way published by Harper Collins in September 2015.
She has written for numerous publications, including three years on Irish lifestyle magazine ‘Image’, and a current weekly column for The Irish Mail On Sunday Magazine, as well as being a regular contributor to Olive, Delicious, and BBC Good Food Magazine, among others.

Rachel lives in her seaside home on the farm at Ballymaloe in County Cork with her husband Isaac, sons Lucca and Joshua, and daughter Scarlett.

Clients often ask about purchasing books for giveaways and delegate packs. Below you’ll find a selection of products by Rachel Allen. Click the images to view on Amazon's website. For bulk orders, please speak with your Booking Agent.

How to book Rachel Allen for your event