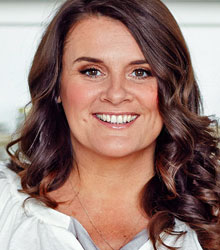 Jo Wheatley is a food writer and TV baker who rose to fame as the winner of the second series of BBC’s The Great British Bake Off.

Since winning, Jo has set up a cookery school from her home in Essex which was listed in The Guardian’s Top Five UK Baking Schools. In August 2015 she was voted 2nd in a poll of Radio Times readers’ favourite ever Great British Bake Off contestants.

Jo also writes a successful blog, Jo's Blue AGA, achieving 1,500+ hits per day, and she interacts daily with her loyal fan base which includes 23K Twitter followers, 36K Facebook page likes, and over 4million views to her Google+ page.

Jo was a recipe columnist for Sainsbury’s magazine January 2013 - June 2014 and is a frequent contributor to various publications including The Sun, The Mirror, and BBC Good Food Magazine, and had a three page summer cookery feature for Hello magazine in June 2015.

On television, Jo has given Jay Rayner a mini lesson on the art of scone making for The One Show (BBC1), performed a cookie masterclass on the Alan Titchmarsh Show (ITV), had a week-long guest appearance on Channel 4’s What’s Cooking?, and showcased her talent for creative party food with a Halloween themed cookery feature on ITV’s This Morning.

Jo is regularly in demand for live food events across the UK, and has hosted the Interview Stage and demonstrated her own recipes at BBC Good Food Show. She is a ‘Star Baker’ for The Cake and Bake Shows 2015, and is a regular face at the Ideal Home Show as well as many regional festivals.
She has worked with brands including Neff, N-Power, and Dr Oetker, and has judged the Big School Bake Off competition supported by Unilever Stork and in association with LACA (Lead Association for CAtering in education) annually since 2013.

When not baking, Jo loves spending time with her family, and walking her dog in the countryside around her home in Essex.

Clients often ask about purchasing books for giveaways and delegate packs. Below you’ll find a selection of products by Jo Wheatley. Click the images to view on Amazon's website. For bulk orders, please speak with your Booking Agent.

How to book Jo Wheatley for your event