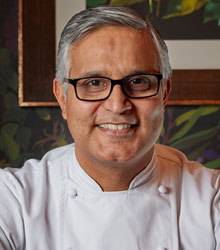 Atul Kochhar is internationally recognised as being at the forefront of the Indian culinary industry. Throughout his career he has changed the way people perceive and experience Indian food.

Born in Jamshedpur, India, Atul’s career began when he rose through the ranks at the prestigious The Oberoi group of hotels in India. Atul gained his diploma in Hotel Management and moved to the Hilton group to work under the guidance of renowned chef Bernard Kunig. In 1994 Atul was given the opportunity to move to London to lead and open Tamarind restaurant.

Inspired by his native India, Atul combines his heritage with his love of British ingredients to create and deliver modern Indian cuisine. It was at Tamarind restaurant in 2001 where he received his first Michelin star. In 2002 Atul then went on to open his very own restaurant, Benares in London’s Mayfair, which earned him a second Michelin star in 2007.

In 2018, Atul left Benares to pursue other independent ventures and to further develop Atul Kochhar Restaurants.

Atul has become the recognisable face of modern Indian cuisine on television, in print media, at festivals and on the radio. His innovative take on food continues to win Atul an admiring public through regular TV appearances including BBC's Great British Menu, BBC's Saturday Kitchen, James Martin Saturday Morning, Yes Chef, Curry On and The Chef. Atul’s entrepreneurial nature made him the perfect investor on BBC2 and Netflix series, Million Pound Menu.

Clients often ask about purchasing books for giveaways and delegate packs. Below you’ll find a selection of products by Atul Kochhar. Click the images to view on Amazon's website. For bulk orders, please speak with your Booking Agent.

How to book Atul Kochhar for your event