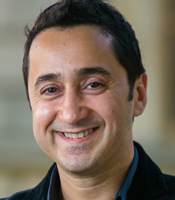 In September 2004 Arun went to Ireland for the Ballymaloe Cookery Course. He went on to work at Ballymaloe House, as a chef and while working there came up with the idea for Green Saffron - importing spices to create authentic Indian blends, accompanied by simple to follow, delicious tasting recipes.

Since winning multiple awards, from ‘Great Taste' and ‘Blas na hEireann' (Irish
Food Awards), the brand has grown enormously, and is now available in Tesco Ireland, and MonoPrix stores in France from July 2015, with plans to expand into UK supermarkets soon.

His passion for the science of spice, flavour combination and achieving the best from his raw product is second to none. Arun's ridiculously infectious enthusiasm makes him the ideal spokesman for all kinds of spicy matters. No matter how conservative the customer, he manages to encourage everyone he meets to embark on their very own culinary adventures.

Arun Kapil make regular appearances on Irish television including TV3's Late Lunch Live, and RTE 1's top rated afternoon show, Four Live. He has also appeared on Channel 4's 2011 programme Cookery School, Market Kitchen on UKTV and is a regular on Irish national radio. He also recently appeared with fellow chef Paul Hollywood on the BBC show Paul Hollywood's Pies & Puds. In the show, Arun introduce the presenter to some wonderfully esoteric wares, and share some of his surprising ways with spice.

Arun Kapil's first cookbook, Fresh Spice, published by Pavilion in October 2014, introduces readers to an entirely new way of thinking about spices, and is tipped as a tome with potential to revolutionise popular perceptions on the topic, with praise from fellow food writer Simon Hopkinson: “This Tiggerish man of spice has been a quietly fizzing fire-cracker for far too long, now. So, thank heavens he has finally exploded with this exciting and colourful book.”

His skills are in hot demand with top chefs the world over – Arun roves the globe to share his knowledge and help develop dishes that completely redefine diners' ideas about spice, developing new products with retailers and restaurants, and experimenting at Green Saffron's own ‘Centre for Spice Innovation'.

As a noted spice authority, Arun boasts an ever-expanding encyclopaedic knowledge of his subject. He can capture a crowd's imagination within a few seconds, and retain their interest for hours. He is a favourite for talks and food demonstrations at events such as the annual Abergavenny Food Festival and often teaches at cookery schools including the Village at Lyons, and Cloughjordan House in Tipperary.

Clients often ask about purchasing books for giveaways and delegate packs. Below you’ll find a selection of products by Arun Kapil. Click the images to view on Amazon's website. For bulk orders, please speak with your Booking Agent.

How to book Arun Kapil for your event