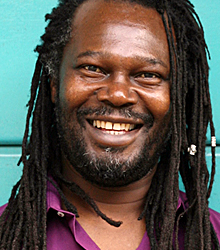 Levi Roots is a reggae musician, celebrity chef and entrepreneur who gained widespread fame when he appeared on the popular business enterprise show Dragons' Den in 2007.

His story began in a tiny little village on the island of Jamaica. As a young boy, Levi, who was born Keith Valentine Graham, helped his grandmother in the kitchen where she taught him the secrets and subtleties of mixing Caribbean flavours, herbs and spices.

During this time, he also discovered his love for music at the church where his grandmother sung. Levi was raised by his Grandmother until he left the Caribbean, aged 11, to join his parents and the rest of his family in London.

In London, Levi went to school for the first time and also visited the Notting Hill Carnival. Little did Levi know that he would later have his own stall at the festival selling the Reggae Reggae Sauce that would one day make him his fortune. Levi Roots and his family have been selling the jerk barbecue sauce under the 'Reggae Reggae' brand name - made to a secret recipe - on their food stall at the annual Notting Hill Carnival since 1991, and in 2006 Levi sold over 4000 bottles at the carnival. Despite the sauce's popularity it took another 16 years of rejection from banks and businesses to invest in the product who thought it looked and sounded “too black”.

That same year Levi Roots took the sauce to the World Food Market, where he was spotted by a BBC researcher who approached him and invited him to appear on Dragons' Den. Levi had never even heard of the show, and went home to his kids asking them what Dragons’ Den was. They begged him not to appear saying; “Dad, don't go on that show, they'll just tear you to pieces!” Fortunately he didn’t take their advice.

Following Levi’s appearance on the show, where he serenaded the Dragons' with his 'Reggae Reggae Sauce' song, wearing his sharpest suit and a winning smile, carrying just a bottle of Nanna Miriam's sauce and his guitar, he secured a £50,000 investment in return for 40% of the business from investors Richard Farleigh and Peter Jones - despite erroneously claiming that he had an order for 2.5 million litres of the the sauce (when in fact the order was for 2,500 kilos) - Richard Farleigh then sold his 20% shareholding just a year later for £250,000.

Shortly after Levi Roots' appearance on Dragons' Den, Sainsbury's announced that they would be stocking the sauce in 600 of their stores. It was a huge success, outselling the leading household name sauce, and is now sold in all leading supermarkets around the UK. There are currently in excess of 50 different food products within the Reggae Reggae brand, from table and cooking sauces, pasties and ready meals to crisps, puddings and even soft drinks.

Having worked in the music industry for over 30 years as a reggae singer, Levi Roots has performed with James Brown and Maxi Priest and was nominated in 1998 for a Mobo award as best reggae performer. He was also a friend of Bob Marley when he resided in the UK and performed “Happy Birthday Mr President” for Nelson Mandela in 1992 on his trip to Brixton.

As a business motivational speaker, Levi Roots is an inspiration for entrepreneurs of all ages. With no previous business background aside from the cottage industry sales of his sauce among the Brixton locals and at the Notting Hill Carnival, Levi has gone from reggae musician to business mogul.

His success as a businessman stems from the self-confidence and perseverance that accompanies all entrepreneurial winners, with an abundance of Jamaican swagger and charm to-boot. Reggae Reggae Sauce is one of the most popular business ventures ever featured on Dragon's Den and Levi Roots has become an inspirational role model for thousands.

Levi Roots speaks to a wide range of audiences, from school events to large business conferences. His main focus has been to promote the Reggae Reggae brand and the message it symbolises. 'I want to spread the word that if a black Brixtonian Rastafarian can make it with just a sauce, then you can make it too.' He is a keen supporter of youth enterprise and visits schools to present inspirational talks about how he became a successful musician and businessman, and achieved his lifelong dream.

Levi Roots was a fantastic speaker! He managed to amuse, entertain and most importantly of all, inspire an audience of all ages. Thoroughly engaging and a true inspiration!

Levi Roots was professional, engaging and certainly has an interesting and amusing story to tell.

Clients often ask about purchasing books for giveaways and delegate packs. Below you’ll find a selection of products by Levi Roots. Click the images to view on Amazon's website. For bulk orders, please speak with your Booking Agent.

How to book Levi Roots for your event