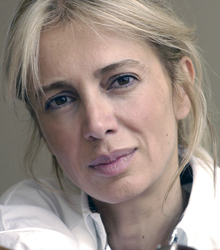 Sahar Hashemi co-founded Coffee Republic, the UK's first US style coffee bar chain with her brother Bobby and built it into one of the UK's most recognised high street brands with 110 bars and a turnover of £30m.

Giving up professional careers (she as a lawyer in London and Bobby as an investment banker in New York) they staked everything on a dream and made Coffee Republic one of the main players in the coffee revolution that transformed the UK high street.

Sahar left the day-to-day management of Coffee Republic in 2001 and published a best-selling book Anyone Can Do It – Building Coffee Republic from Our Kitchen Table, which has been translated into 6 languages and is 2nd highest selling book on entrepreneurship after Sir Richard Branson.

In 2005, she founded Skinny Candy, a brand of sugar free sweets, labelled hip by Vogue magazine. Skinny Candy was sold to confectionery conglomerate Glisten PLC in 2007.

Her second book, Switched On, published in 2010, focuses on 8 habits that foster a more entrepreneurial mindset for employees. It is based on her experience of the transformation in culture when a small entrepreneurial company becomes big and successful, when the obvious and easy entrepreneurial habits are often forgotten as bureaucracy take over.

In 2011, Sahar was nominated by Director magazine as one of its Top 10 Original Thinkers, taking her place alongside individuals such as Sir Tim Berners-Lee, the inventor of the World Wide Web and Jonathan Ives, former Vice-President of Design at Apple and designer of the iPod.

The magazine praised her view that "Entrepreneurially minded talent shouldn't have to leave large corporations in order to achieve fulfilment. Entrepreneurial behaviour, including ideas like bootstrapping, prototyping and celebrating failure, can help turn stuffy corporations into creative environments. They can also transform automatons into valued, engaged employees".

Also in 2011, she was invited to join the Entrepreneurs Forum set up by UK Business Secretary Vince Cable to give informal personal advice to the government on enterprise policies.

In June 2012, Sahar was awarded an OBE for services to the UK economy and to charity. She was named 'Pioneer to the life of the nation' by Her Majesty The Queen and a Young Global Leader by the World Economic Forum in Davos.

In 2019, Sahar published her latest book Startup Forever. She explains the purpose of the book: "In my work, I'm always asked the same questions:-
How can we grow big but act small?
How can we encourage innovative thinking and drive growth by finding different and new ways of doing things?
As we face disruptive change, how can we be more agile, more resilient and less stuck in our ways?
How can I get my people to think outside the box, to experiment, and take the initiative?
How can I get everyone in the company to think more like entrepreneurs?

She is a mentor to Change Please, a charity that provides pop-up coffee bars run by homeless people, giving them the help and support they need to turn their lives around.

Her keynote presentations are unique and authentic, blending her real-life story of building a household name brand with the key habits for innovation and creativity. These habits will make companies nimbler, more creative, more customer-centric, more resilient and better places to work.

Sahar Hashemi ignites her audiences with a ‘can do’ spirit and the tools and habits to ‘make it happen’. Through storytelling, she is able to connect with audiences on an emotional level and bring to life her conviction that entrepreneurial behaviour is needed in every business.

Some of the messages weaved into Sahar’s story include:
• Igniting creativity and innovation - we ALL have the capacity within us to innovate, it isn’t about genius tendencies; it’s just about finding a better way
• Entrepreneurial behaviour - it’s not just for start-ups, but for corporations of ALL sizes
• Customer service – stepping into the customer’s shoes; impersonating our customers, and not just relying on market research, gives us the best insights.
• Persistence and resilience - new products and services are always rejected, so we need to develop persistence and resilience.
• Embracing Change – We can’t spot opportunities sitting tight in our comfort zone.

Workshops
Sahar Hashemi believes that entrepreneurial behaviour is not a personality trait and it’s not restricted to start ups- it’s a set of habits that can be learned by anyone. And that is what her unique workshops are about.

They give participants the inspiration, the experience and tools to think and behave more like entrepreneurs (and less like an employees) in the challenges they face every day.

So, what does Sahar’s workshop deliver?
• A FUN simulated experience of the entrepreneurial process- from spotting the opportunity to making it a reality.
• An UNDERSTANDING of entrepreneurial mindset: what it is, why its important and how to make it happen in corporate environment.
• LEARNING the 8 habits and practice applying them to day to day challenges
• increased CONFIDENCE about personal creativity and how to tap into it.
• A set of tangible, easy, INSTINCTIVE habits you can immediately adopt at work.
• AWARENESS of what ‘gets in the way’ of creative things happening.
• A personal ‘to do list ‘ to make CHANGE happen.

Sahar Hashemi took her audience on a 30-minute ride-taking them through a heart-tugging and sincere tale of how she made it big in business... Her story was a little like the Alchemist, and the audience wouldn't stop clapping even after she stepped down from the stage.

We were having a fantastic annual conference on Friday – that is until Sahar Hashemi arrived and then it just went onto another level! Her delivery was perfect and the similarities about what she achieved and what we at e.surv are looking to achieve really struck a chord with the audience!

It is always inspirational to hear the story from someone who has really pursued their dream and made it come true, particularly in such a down to earth fashion.

your energising talk on the necessity of passion to drive business growth was inspiring for everyone... I overheard the audience quoting 'leap and the net will appear' for days afterwards! Needless to say our expectations were surpassed.

The impact you had on everyone's mindset: This was very visible the next day - the audience had a real “can do” spirit. This was most evident when one speaker caused a significant reaction from the audience by being pessimistic and resistant to trying anything new or different. I do hope you appreciate what an impact you made and I thank you once again!

If every leader in corporate life had the drive, determination and sheer courage of Sahar Hashemi, businesses would be in an even better place. Sahar is an amazing entrepreneur, and her lessons are absolutely relevant no matter what business you are in.

Judging by the feedback that we have received, it seems as though the 'Switched On' presentation was very well received - certainly hit the spot in terms of how people in the Group would like to work smarter.

Sahar's passion for encouraging innovation energises room. It's the verbal equivalent of a double espresso from the Coffee Republic chain she co-founded

Clients often ask about purchasing books for giveaways and delegate packs. Below you’ll find a selection of products by Sahar Hashemi OBE. Click the images to view on Amazon's website. For bulk orders, please speak with your Booking Agent.

How to book Sahar Hashemi OBE for your event