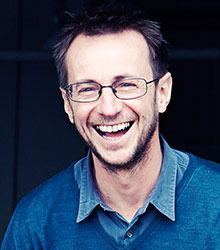 David Hieatt is an entrepreneur, marketeer and brand builder. He began by selling frozen Tip-Top lollies to fellow pupils at his school in Ystrad Mynach — used to go to the wholesalers and buy 100 every night and shove them in his mother’s freezer. In the morning, he would wrap them in foil to stop them melting and they would all be sold by the 11 o’clock break.

He was barely out of school when David received his first taste of business failure. He’d seen someone selling fans at a local market where he grew up, and the budding entrepreneur wanted a slice of the action; they were selling like crazy, so he bought a load of them thinking that summer was coming. But it hammered down with rain for weeks afterwards, leaving the budding entrepreneur with a mountain of unwanted stock.

Future forays into business were to prove more successful. Leaving school at 16 to open a market stall on the South Wales Valleys selling trainers taught David the importance of sales and a good pair of shoes – on a good day he had money to buy to enough petrol to get home.

On a bad day with no sales, he walked. Then, at 21, he joined Saatchi & Saatchi. There David learnt to take risks from Paul Arden, one of the true mavericks of advertising and he became an award-winning copywriter. He was taught to trust his instinct. And to fight to make his ideas happen.

In 1995, David started a clothing company called Howies, and in 2001 he returned home to Wales to build Howies full-time, a clothing company that was heralded as the Patagonia of the UK for action sports. After selling it to Timberland in 2005 David co-founded the Do Lectures, an annual (now biannual) event in the nearby countryside featuring talks, music and workshops with leading thinkers and doers: like a more friendly, down-to-earth version of TED, but in rural Wales. And now the USA and Australia too. It was voted in the top ten ideas festivals in the world by the Guardian.

Among David Hieatt's other businesses is The 25 Mile, a gastropub in Cardigan, which only serves food sourced from within 25 miles of the town itself. In March 2012, David Hieatt founded Hiut Denim Co, a premium Denim label based in Cardigan, North Wales. Cardigan was home to the largest surviving jeans factory in Britain.

Four hundred employees used to make 35,000 pairs of jeans a week over three decades of production. Then one day, due to an out sourcing of the manufacturing to Morocco, the factory inevitably closed. Hiut Denim Co's purpose is to build a global denim brand in order to give those 400 people their jobs back. Hiut Denim has since grown from an operation of five to ten, and includes four “grand masters of denim” – the name Hieatt has bestowed on the machinists because of the 100-plus years of experience they have between them.

David Hieatt has a cult internet following, and has spoken at Apple, Google, ITV and many other top companies and events.

Why Brands With A Purpose Do Better And Matter More
Have you ever noticed that some of the best brands in the world make us feel something? They tell us their dreams and what they want to change. They bare their soul. And it touches us. At some point, we stop being customers and become fans.

These companies like Apple, Patagonia and so many smaller businesses have a reason to exist. They know why they get out of bed in the morning. They have something that most brands don’t have: A Purpose. And it is an incredibly powerful thing.

Purpose gives you strength to fight the impossible. It builds your culture. It wins you your fans. It is your backbone. It is your stubbornness. But more importantly, it helps to stop you from quitting. The pain of quitting a business is one thing. But to quit on a dream is quite another.

In this talk David Hieatt reveals the intuitive — and often counterintuitive — principles at the heart of any great purpose-driven brand, and show how you can apply them to your own. Things like:

• That ‘why’ matters
• The importance of being first
• Why you only need 1,000 true fans
• How to find your voice and share your story
• How to build a great team and company culture
• Why trusting your customers breeds magic

Would the world be different, better even, if more businesses were like this? Most companies don’t have a purpose. Odd as it sounds, but most people have forgotten why they are in business. The founders are dead. The purpose is no longer there. They think it is just to make money. But making money is a result. It is not the purpose. For David Hieatt, a business that has a purpose is much more energised. It is the wind for the sailboat. It pushes you and the team on. It is the fuel for the journey ahead.

A lot of businesses fail because they give up. They give up because they never had a purpose so when things get tough, they quit. 90% of businesses haven’t worked out why they are in business, and it’s vital to do so. It’s important to do so because it gives you great motivation. Understand the why. It’s pivotal to your success. Your team needs to understand it. And sooner or later your customer will get what you are about too.

David Hieatt is the man who proved to a world full of shallow brands the benefits of having a real purpose. There is no greater expert on the matter.

Clients often ask about purchasing books for giveaways and delegate packs. Below you’ll find a selection of products by David Hieatt. Click the images to view on Amazon's website. For bulk orders, please speak with your Booking Agent.

How to book David Hieatt for your event