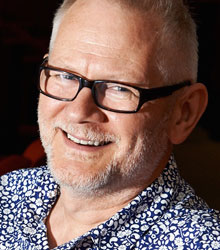 Simon Middleton is a branding expert, manufacturing entrepreneur and founder of the Shackleton brand, who was recently named as one of The Manufacturer magazine's Top 100 Manufacturers in the UK, in recognition of leadership cultural change and innovation. He is also a Brand Ambassador for the 'Made In Britain' organisation and on advisory board of another called 'Make It British'.

Simon opened Britain's first banjo factory in more than 60 years and has developed The Shackleton Design & Manufacturing Company, a menswear and lifestyle brand that produces high quality products inspired by the Antarctic explorer Sir Ernest Shackleton, all manufactured in Britain. The Shackleton was launched using a crowd funding campaign on Kickstarter and is one of the top 2% most successful Kickstarter projects since the platform launched. Simon Middleton also successfully raised a further £750,000 in equity funding for the business through angel investment.

Simon Middleton has also written numerous business books about personal-development, branding and marketing. His first book ‘Build A Brand in 30 days' was an Amazon No.1 bestseller in its category and described as “invaluable” by Director magazine. His second book ‘What You Need To Know About Marketing' is an essential guide to marketing and his third book ‘Brand New You' was a Daily Mail and Mail on Sunday featured ‘Book of the Week'.

He is also frequently consulted in the media, commentating on brand related topics and has appeared on BBC (Today, Breakfast, BBC News, Newsnight), CNN, Sky and Five.

Simon Middleton delivers inspiring and motivating keynotes, drawing on his own unique career path but focused on marketing, brand expertise, British manufacturing and the challenge of being an entrepreneur. His speech topics include:

Very many thanks for your contribution to Lead On, which achieved exactly what the conference is all about. It stretched people's thinking, and gave them something practical to take away and use immediately. And like the best of all presentations it left people hungry for more.

Many thanks for an excellent contribution to the Corporate Branding conference and adding a very attractive dimension. It is always very special to have a fine speaker do their magic.

Many thanks for the Morphological Analysis seminar - we've used the technique twice already to significant effect, the first of these may well have saved us £1m of cash flow next year!

Thanks for your generosity in giving us your guidance on creative thinking. A brilliant session!

Congratulations on a first-rate presentation that has received a very good feedback among our audience...ranking you as the best speaker of the event!

Clients often ask about purchasing books for giveaways and delegate packs. Below you’ll find a selection of products by Simon Middleton. Click the images to view on Amazon's website. For bulk orders, please speak with your Booking Agent.

How to book Simon Middleton for your event