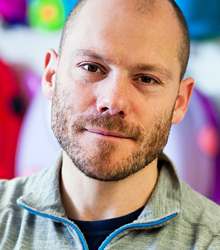 Rob Law MBE is the founder and CEO of Trunki, the innovative brand behind the much loved children’s ride-on suitcase. The company has been a game changer in retail; creating a new retail category of Children Travel Products and offers a whole range of innovative solutions that help families on the go.

While the road to success was not a quick or easy one, Rob’s Bristol-based company now turns over in excess of £8m a year and a Trunki suitcase is sold every minute. In just seven years of trading, the company’s reach expanded to 97 countries across the world with all Trunki creations designed in England, and the suitcase being manufactured at the company’s UK factory in Plymouth.

Since Trunki launched in May 2006, the company has sold 2.8 million suitcases in 100 countries with consumers spending over £100 million on his brand. Trunki employs 30 people at its Bristol head office and a further 44 people at its manufacturing and distribution facility in Plymouth.

Rob Law’s story...
An inventor and successful entrepreneur, Rob Law studied Product Design at Northumbria University where he first came up with the concept for his ride-on suitcase in 1997. When asked to design luggage as part of his course, his “Eureka!” moment came when he couldn't find much inspiration in the luggage section of his local department store, finding himself wandering into the children's section and spotted ride-on toys. The rest is history; the children’s Trunki suitcase was born!

Rob is a wonderful example of perseverance. When he first set about pitching his idea it was rebuffed by toy companies insisting his product was luggage and luggage companies maintaining it was a toy! After putting his plans on hold and going travelling, Rob returned to the UK in 2002 and at once turned his attention to securing funds for Trunki’s licence.

Rob Law’s first real success was in being awarded a grant from The Prince’s Trust and in finding a licensee for his product. However, this early success was to be short-lived as the licensee went bankrupt, so Rob took out a £10,000 loan to start producing Trunki himself. He suffered several major setbacks including faulty production, the bankruptcy of a crucial supplier and terror alerts resulting in a ban on aeroplane hand luggage. Yet Rob refused to give in!

In 2006, Rob’s luck looked set to change when he appeared on the BBC’s Dragons’ Den but, despite a promising start, a strap broke on one of the cases causing all the investors to walk away. In response to this disaster, Rob added a survey to his company website, inviting customers to leave suggestions and feedback. Despite his on-screen calamity, positive comments and orders flooded in. Rob secured an interview with the John Lewis Luggage Department and Trunki’s fortunes took an upward turn.

The company has now won over 100 awards from the consumer, trade, toy, design and business sectors; its most prestigious accolade being named SME of the Year at the National Business Awards in 2012. On New Year’s Day 2011, Rob Law was awarded an MBE for services to business, and went on to receive an honorary degree of Doctor of Engineering from Bath University in 2015.

In 2018 Rob was awarded an Honorary Degree of Doctor of Business Administration from UWE.

Rob Law MBE is a passionate and engaging business speaker with a fresh approach to leadership, instilling innovative thinking across his organisation, not least for his ‘dragon slaying’ tips, fresh take on running a business and how to navigate ever evolving challenges in the global marketplace but also for his passion for the power of good design, leadership, UK manufacture and exporting. Moreover, he is a proven inspiration for young British designers and a vocal campaigner for changes in Intellectual Property law.

Beginning his business career as a simple start-up, Rob Law built the Trunki brand to become a world famous name with popular appeal that met a genuine consumer need; as a keynote business speaker Rob covers both the successes and setbacks of his brand development; an exciting and thought-provoking speaker he also helps business owners to create a motivating and enriching environment to enhance productivity in the workplace.

Known for going up against the feared Dragons of the BBC TV series Dragons' Den, Rob Law pulls on recent events in his career and demonstrates how small businesses can continue to be successful in the current economic climate.

Over the years he has won more than 70 industry and consumer awards, including the coveted National Business Award, and distribution in almost 100 countries; Rob is an icon of British business and would make an excellent choice of keynote speaker.

Outside his work as an entrepreneur, Rob has been diagnosed with Cystic Fibrosis and works actively to raise funds and awareness for the Cystic Fibrosis charitable foundation; part of this work has included the development of a video in which Law discusses his refusal to let his disability prevent him from achieving his ambitions and, he hopes, will inspire young people with Cystic Fibrosis and help them through the difficult transition from adolescent to adulthood.

The feedback from both the client and staff event has been fantastic and they loved the insight you provided.

You provided a fantastic talk and we have received great feedback from the lecture, your story is very inspiring.

Rob ‘s ‘warts and all’ story about how he took Trunki from idea to a global travel brand for children is very compelling and I would highly recommend him as a speaker.  He is authentic, engaging and entertaining and had the audience eating out of his hands.

Clients often ask about purchasing books for giveaways and delegate packs. Below you’ll find a selection of products by Rob Law MBE. Click the images to view on Amazon's website. For bulk orders, please speak with your Booking Agent.

How to book Rob Law MBE for your event