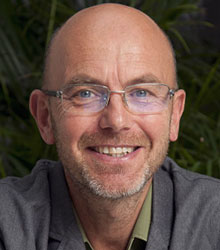 After spending most of his childhood being 'dragged' up in Blackburn, the young and multicultural Hemingway left school with 10 O' Levels and 4 A' Levels. In 1979 he gained a Degree in Geography and Town Planning at University College, London.

The move that sealed Wayne's fate was taken to fuel funds for the band in which he played at the time. One day Wayne decided to empty his wardrobe and that of his childhood sweetheart (now wife Gerardine) and took the contents to sell on Camden Market. The realisation that money could be made from fashion suddenly dawned.

With Gerardine, Wayne Hemingway built Red or Dead into a label that received global acclaim resulting in winning the prestigious British Fashion Council's Streetstyle Designer of the Year Award for an unprecedented 3 consecutive years in 1996, 1997 & 1998. After 21 seasons on the catwalk at London Fashion Week they sold Red or Dead during 1999 in a multi-million pound cash sale.

They then set up their own design company specialising in affordable and social design. The highest profile projects are The Staiths South Bank and an 800 property mass-market housing project on Tyneside for Taylor Wimpey, where they are involved from the master planning and architecture through to the landscaping and marketing of this groundbreaking project. The Staiths has won a series of high profile awards including Housing Design Awards and Building Magazine's 'Best Housing-Led Regeneration Project'.

Working with Taylor Wimpey and Broadway Malyan they worked on the master-plan for one of the first Thames Gateway schemes in Dartford and won against stiff opposition.

Wayne is the Chairman of Building for Life, a CABE (Commission for Architecture and The Built Environment) funded organisation that promotes excellence in the quality of design of new housing. He received an MBE in the June 2006 Queens Birthday List, is a Professor in The Built Environment Department of Northumbria University, a Doctor of Design at Wolverhampton, Lancaster and Stafford and a Fellow of Blackburn College. Wayne is currently part of the panel for The Eco Towns Challenge.

Wayne Hemingway is highly sought-after for presenting talks on his career in business, housing, urban design, education and the creative sector and is a host of creative industries related awards events.

With a career spanning four decades in the design industry, Wayne Hemingway has a fair few stories to tell and lessons to give – and people love to hear them.

His talks are insightful, thought-provoking, inspiring, often hilarious and always truthful, warts and all.

Wayne's Life Story
Wayne Hemingway's rise to success was a rather unusual one, with his big break on a Camden market stall and a segue into housing design due to a scathing piece he wrote for The Independent. Audiences are riveted by his rags-to-Red or Dead tale and how Wayne has continued to push himself creatively, wherever his career may take him.

Wayne's Career History
This talk encompasses Wayne Hemingway's erstwhile role as Director of The British Fashion Council, to being on The Trustee Board of the Design Council and the Commission for Architecture and the Built Environment. Wayne's eye-opening insights on how creativity can have social and societal impact and also enhance the bottom line are endlessly riveting and provide real talking points for business owners, employees and students alike.

Brand building, Marketing and Leadership
Wayne Hemingway explores the contrasts and synergies between building Red or Dead in the 1980s, before the internet, and building the Vintage brand using social networking and digital marketing, along with effective and creative leadership techniques.

Regeneration, Housing, Urban Design and Architecture
Over the past decade, Hemingway Design has delivered a number of high profile and award-winning affordable new build housing schemes, 'turned around' troubled estates, have a string of high impact seaside regeneration projects under their belts and an extensive worldwide knowledge of creative led regeneration, great urban design and architecture.

Wayne was the chairman of the place-making campaigning body Building For Life for eight years and sits on the Trustee Board of CABE (Commission for Architecture and Built Environment). His views are political, often controversial, and as HemingwayDesign works with some of Britain’s largest house builders, is able to comment on the state of an industry which has a significant impact on the economy and our well being.

Event Production
Described by many as the most ambitious and coolest festival start-up ever, this is the story of The Vintage Festival: identifying an opportunity in the market, then designing and delivering a summer festival for 50,000 people from scratch.

The assembly of the team of designers, collaborators, bands, artists and designers, volunteers, plus the viral and street-led campaign, is an amazing and visually stunning chain of events, full of disasters and triumphs.

Now an internationally recognised brand with some interesting spin-offs (including the Classic Car Boot Sale and Festival of Thrift) and a leading name in the competitive festival market, Vintage is the events arm to Hemingway Design and has a string of successes to its name, including the official The Queen's Diamond Jubilee Pageant Festival in June 2012 for 70,000 in Battersea Park and the Transatlantic 175 event that attracted 250,000 to Liverpool’s Waterfront in 2015.

Social and Cultural Responsibility of Companies, Corporations and Individuals
We have come to learn how large corporations increasingly care and share our belief about 'improving things that matter in life'. Wayne Hemingway has worked with McDonalds, Coca Cola, Cafe Direct and others on responsible products, and there are many avenues he loves to explore on this theme.

Thank you so much for a terrific session during Vision forum - you were inspiring and engaging. And delivered some key messages that Vision people need to hear.

A big thank you for flying out for our Singapore Symposium - you really energised the group with new enthusiasm and perspectives on charity. The feedback we've had has been fantastic. What an incredible story! You have outdone Sir Richard Branson based on the interesting, fun and socially responsible projects that you've completed.

I would just like to thank you for your participation in Monday's Sustainable Construction iNet Awards Dinner and for playing such an important part in making it such a success. Your involvement was particularly invaluable and your presence a major draw to bring in such a big audience. The overall general feedback taken from delegates on the night was extremely positive with your key note address being very well received.

Thanks for your lecture at the Kent Construction Expo last week. A good kick up the backside and an eye-opener as to where the housing boom/developers took so many wrong turns. It has left me thinking about how we got into the mess we are in, and whether we are going to extract ourselves out of this housing mess by repeating all the same mistakes. Your lecture was packed full and refreshing.

I wanted to thank you for an absolutely excellent talk at our meeting on Friday evening. We have had universally good feedback with our staff finding you both entertaining and thought provoking which was exactly what we wanted. You have a fascinating story and a great approach to life which comes across so naturally in the way you present, giving great credence to your call for action without lecturing. It was a delight to listen to and the interesting thing for me was that a number of the audience left with the stated intent of doing something different.

As always, you managed to engage and provoke thinking in our BBC leaders and I had many asking me to send you their personal thanks.

On behalf of everyone at Kent Housing Group thank you very much for coming along to our Seminar and giving such an inspirational presentation. The feedback from delegates is that your presentation was the highlight of the day and we are extremely grateful that you were able to spare the time to be there.

Thank you for your exhilarating star turn at the Oxford Innovation away day. You will have sensed that your contribution was more than well received and much enjoyed but I think it went far beyond that! I was personally most moved by, first, the reminder that entrepreneurs travel in non-straight lines towards their accomplishments and, second, you reminded us that purpose, or rather social purpose, in one's life is a healthy thing but is so particularly for a company that seeks to provide environments for innovators to thrive and for small businesses to survive when they otherwise might not.

Clients often ask about purchasing books for giveaways and delegate packs. Below you’ll find a selection of products by Wayne Hemingway MBE. Click the images to view on Amazon's website. For bulk orders, please speak with your Booking Agent.

How to book Wayne Hemingway MBE for your event